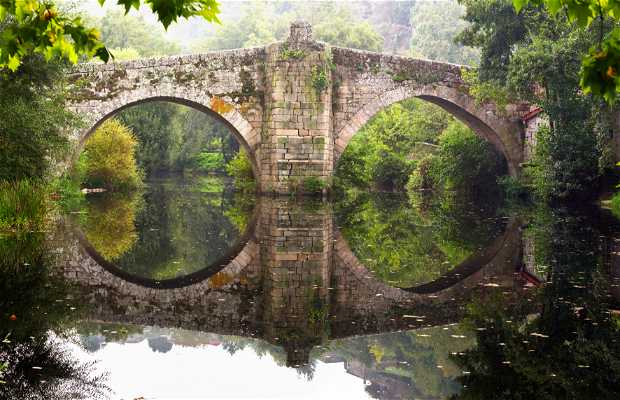 The Arnoia river, young and crystalline, crosses the small and beautiful city of Allariz. Legend says that it was the Swabian king Alarico who chose this beautiful bend of the river to establish the city.

After being a defensive landmark of the south of Orense –in the 11th century they built the castle and its walls, today in ruins– the town became famous for its literary court and it was the place the kings were educated and crowned. Allariz had then its moment of splendor. They built magnificent buildings, churches and monasteries and they established prosperous tanneries, workshops and factories that produced, with the water of Arnoia as its motor, excellent fabrics, leathers and cereals.

One of Galicia's Most Interesting Towns

I am not exaggerating when I say that Allariz is one of the most beautiful towns that I have visited. It is located only 12 kilometers south of Orense and the best option to get there is by car (about one hour and forty five minutes from Santiago).

If you prefer to use public transport, it is easy to get to Orense by train and then take a bus to Allariz. Its old part of town, the landscapes that surround its river (Arnoia), the atmosphere of its streets, its churches, its gastronomy and the amazing nature make Allariz one of the most interesting towns in Galicia; it is worth a visit.

Allariz received the European Prize for Urbanism for recovering its historic and artistic complex as well as its river. You can see how well preserved the houses, monuments and nature are.

Allariz is a few kilometers away from Orense, so it’s a great place for a quick getaway.

Its historical part of town is preserved thanks to a strong restoration project that has been maintained in the last years, so it is a real pleasure to walk around.

Without a doubt, the most peculiar aspect of Allariz is that it is full of outlet stores of different brands, which have managed to get confused with the rest of the classic architecture of the place. Culture and fashion in the same place…

Lists and places related to Allariz