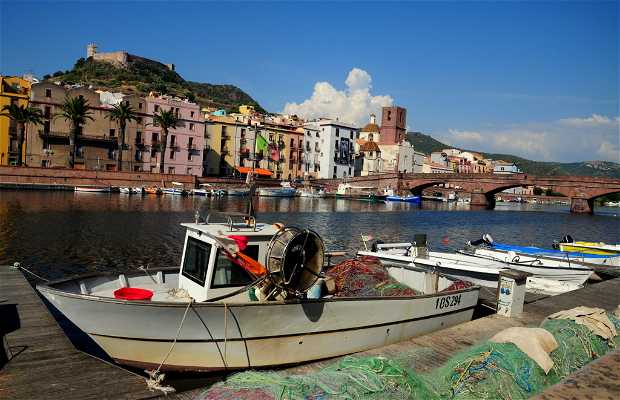 A city of colors

Bosa is small city in western Sardinia. You notice it from the highway due to its brightly colored houses (“Sa Costa,” locally) and the maze-like mesh of cobblestone streets in the historic center. In a way, Bosa is a city which blends tradition and modernity. The old city’s main street, Corso Vittorio Emmanuele II, is lined with 19th-century buildings and ornate iron balconies and the entire town is watched over by the 10th-century Malaspina Castle. The Temo River crosses through the village and is lined on one side by high palm trees and by historic abandoned tanneries on the other.

Bosa locals are also big fans of pizza and the best place to grab a slice is Giovanni, a small pizzeria near the main square.

In the Sardinian town of Bosa, as in most of Italy, terraces are everywhere. On every corner, in every street or walko there is a terrace for the weary visitor or locals themselves ttake a snack or tapas, which also exist here. Sardinia, as a typical Mediterranean island, is the perfect spot for an outdoor aperitif. And, of course, follow the local tradition of taking an ice cream at any time of the day.

In this enchanting village, the colorful homes seem to climb up the sides of the Serravalle, the village’s small mountain which is topped by the Malaspina Castle. The Temo River, on its lazy course to the sea, cuts through the village and divides it in two. On the left side, you’ll see the old factories (“Sas Conzas”) which hearken back to a bygone era. As you follow the river to its mouth, you’ll arrive at the large beach of Bosa Marina. There’s also a sports marina and the 15th-century Isola Rossa lookout tower (also called the Torre del Porto). The marina area is a wonderful place to enjoy the

Bosa, a little gem of a village in western Sardinia, is a must for anyone visiting the island, not only for its unforgettable scenery and amiable atmosphere, but also because it’s a truly unique place. Given that so much of Sardinia's economy is based on sun-and-sea tourism, it's surprising to find out that there are actually very few ancient coastal cities. In the past, the island's inhabitants tended to stick to the interior where they subsisted off of herding and agriculture rather than fishing and surfing! Bosa, though, was originally a Phoenician city, a fact which makes sense given its strategic location.

+30
Like
Have you been here?
Add your opinion and photos and help other travelers discover

Lists and places related to Bosa

Links to Bosa
Hotels near Bosa Villages in Bosa
See something odd?