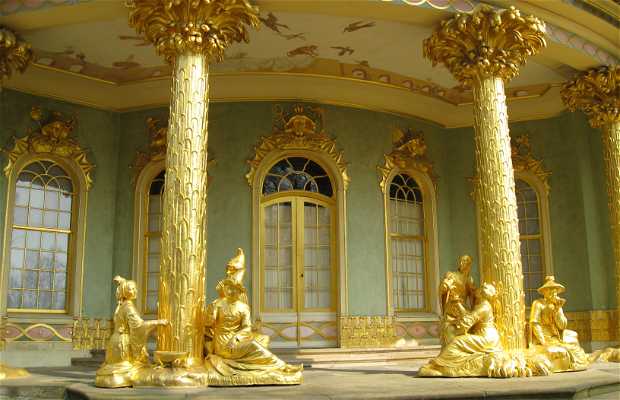 If you come to Berlin in spring or summer and visit Sansoucci Castle in Potsdam, you will also know this 18 century tea house. Not in use now, but for its décor and its historical significance, worth a visit. Frederick the Great had it built when the East became fashionable, first in Germany, then in France and the UK. The trend was called Chinoiserie, and both the figures and the decoration of the walls were made imitating models of vases and china. Interestingly, the architect and the painters had never been to Asia. The interesting thing is the magnificent result of gilded figures that decorate this mini clover shaped construction.

Sanssouci Park is full of palaces, but I particularly liked the Chinese Tea Room. At first glance, its style is totally different from the other places. What stands out most are its sculptures and decorations, that dazzle when the sun is shining. This building has so much charm. It feels like you have been teleported to China without leaving the grounds.