Christ of the Passage 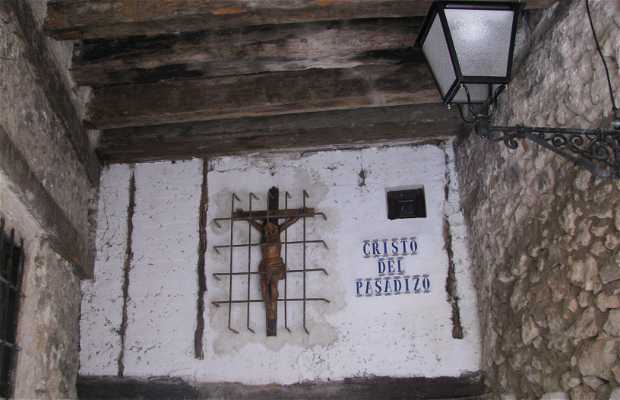 4 photos of Christ of the Passage

2 reviews of Christ of the Passage

According to the legend, a beautiful young lady used to live behind a barred window next to the passage. Her name was Inés and whe was in love with Julián, a handsome young man who used to go and see her everyday at the window. Inés' parents did not approve of their relationship because Julián belonged to a lower social class.

Julián, fed up with the family's disdain, decided to join the army and go fight the war in Italy in order to improve his future. The night before leaving, the couple swore to be faithful in front of the Christ of the passage. Far from him, Inés felt lonely and bored, even though she sometimes got news from Julián. There were many suitors and, after many months, she gave in to Lesmes' requests.

This spot of Cuenca is special both for its location and for the legend it is associated with. It is located in Julián Romero Street, below the upper part of the historic downtown (the wall and Trabuco Street), on the side of the Hoz del Huécar, towards the Plaza Mayor and the Cathedral.

As its name indicates, it is a passage located below a house of the historic downtown, which forms a kind of arched and paved passage. In this passage you'll see the figure and sculpture of the famous "Cristo del Pasadizo".

The passage itself has its own legend. This is how our guide told it to us:

"It is at this grille that Julián, a handsome young boy of humble family came to woo the beautiful Inés, a lady of a noble family of Cuenca. They fell hopelessly in love, but Inés' parents never accepted Julián, only because he came from a lower social class. Julián thus decided to go fight the war in order to make a fortune and prove to everyone his worth. The night before leaving, Julián and Inés swore to be faithful kneeling in front of the Christ. Nevertheless, time passed and when he came back from war, Julián realized that after two years far from home, his spot at the grille had been taken by another suitor called Lermes. He got angry and, blinded by wrath, launched himself into a duel with his sword. But Julián stumbled on a step, fell and Lermes' sword went through Julián's body, killing him on the spot. Inés asked for help. In Lermes' attempt to flee he fell and broke his neck. After witnessing the death of both, Inés felt guilty and shut herself away in the Petras Convent forever".

Lists and places related to Christ of the Passage

Information about Christ of the Passage