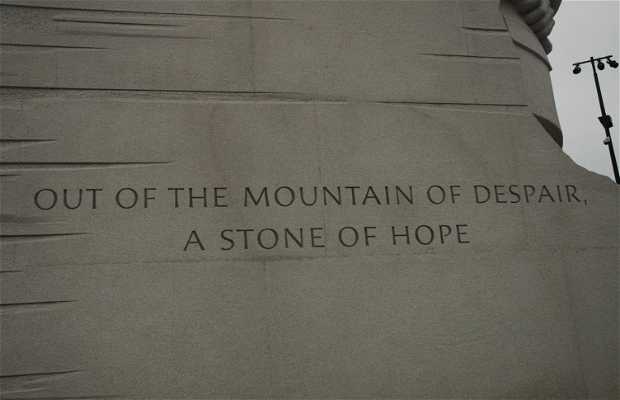 On the 48th Anniversary of the March on Washington led by Dr. King, this monument was revealed. When walking around Washington DC, it is hard not to trip over a memorial or monument, but this one is a beautiful and serene surprise from any other memorial. It is not housed in a building like the Lincoln or Jefferson Memorials. It is not a solitary statue, but a beautiful sculpture coming through a boulder. When coming up to see the memorial, you enter from the busy Independence Ave and into the open bay air by Tidal Basin.

Cherry Blossom trees are surrounding the area, and if you go in the spring, the petals are dancing through the wind. It is like a hidden sanctuary away from the business of the capital. The memorial is carved from a giant boulder with a large space between it. It is purposely set there so that visitors coming to see the memorial get the view from behind it and can see the Jefferson Memorial across Tidal Basin through the break. Jefferson was the symbol of freedom and liberty which were the same principles MLK Jr. based his beliefs on.