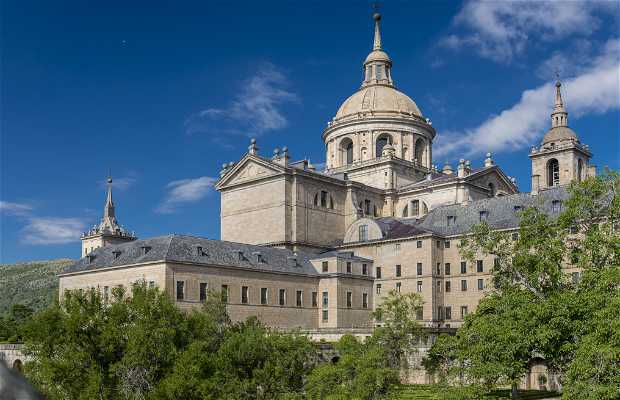 Peace in the Mountians

The San Lorenzo de El Escorial Monastery just outside of Madrid is one of the best things to see on a day trip from the capital. The monastery is set on the edge of the mountains in an atmosphere of oak groves, rolling hills, gardens, and ponds and a stroll through the geometrically-manicured gardens with the snowy mountains in the background is a very welcome chance to disconnect from the graffiti-riddled chaos of Madrid.

The interior of the monastery is spectacular and has some frescoes and painted cupolas to rival anything found in Rome (my wife swears it's better than the Sistine Chapel).

What I liked best were the views from the monastery, surrounded by the mountain. I imagined how it had to be before all the tourists began to arrive, without people and the tourist information points along the visit. I imagined silence and an immense green mantle.

The gardens are spectacular. They suck you in. You’ll want to look at them for hours upon hours, walking between the hedges, seeing the sun shine off the leaves as they smoothly pass across your skin like a spring morning.

This monastery, declared a good of cultural interest, was constructed under mandate of Felipe II and represents the power that the Austrian monarch achieved in their time.

Juan Bautista of Toledo was chosen to head the project although Juan de Herrera is the architect that appears on the seal, as he completed the project.

Particular places like the library, the basilica, the Palace of the Austrians and the Bourbons stand out. Although, in my opinion, the Royal Pantheon was what I liked best.

This being my first trip to Spain, I was simply stunned at the places we visited. The Royal Monastery was one of those beautiful surprises that I didn't expect! This massive fortress/family home/monastery was gigantic. As you enter you immediately walk into a huge courtyard that is very simply decorated. Our tour guide kept us busy for over two hours viewing royal family rooms (and something I found extremely interesting- the bedrooms both had a window that looked directly into the chapel portion of the fortress so mass could be heard/watched in the king/queen's bedrooms), the crypts, and the chapel itself.

El Escorial, a UNESCO World Heritage monument was the center of Felipe II’s empire, where he organized his palace and library, as well as pantheon, as well as those of his parents (Carlos I and Isabel of Portugal), and those of the family that would succeed him. There was a large basilica that found the monastery in question.

I always remember it being very cold there, but it really is a beautiful place. Not just the monastery either, but the entire town. There are many restaurants and cozy cafes.