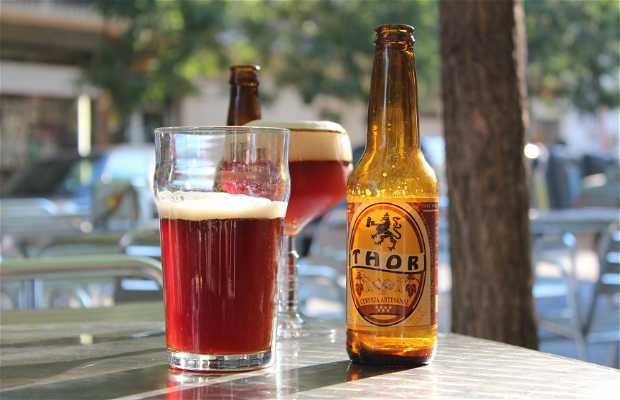 That a great craft beer bar would open up in Madrid's bohemian Lavapies neighborhood was only a matter of time, and El Pedal is everything I hoped it'd be. In contrast to the industrial-chic craft beer spots of Madrid's other alternative (or, according to some, yuppie) neighborhood of Malasña, El Pedal is a laid-back watering hole with charmingly DIY décor, a clientele ranging from gutter punks to elderly couples from the neighborhood, and some seriously tasty beer on tap.

El Pedal usually has six or seven beers on tap, typically an IPA or two, a stout, an ale,a wheat beer, and one or two wild-cards (think ginger beers, chocolate stouts, or the house's own self-brewed ale). They serve pints and half pints, usually costing around 5.50-6 euros and 2.50-3 euros respectively. They also have several fridges full of bottled beer but they're priced according to bar standards, not retail standards. The bottle that'd cost you 3-4 euros in a beer shop like La Buena Cerveza or Cervezorama will run you 7 euros in El Pedal. Still, who'd order a bottle when you have such tasty and well-priced beers on tap?

Craft beer under a full moon (or a scorching sun)

When the remarkably reliable Madrid sun is out, or it’s a deliciously airless summer evening, drinking outside – at tables that sprawl across a footpath or in the middle of a leafy square – is well-nigh heaven on Earth. And El Pedal, at the very end of the buzzing, bar-lined Calle Argumosa in Lavapiés, has the best terrace of all the craft beer bars in the city. If you manage to score a spot (it gets busy), you’ll sip your stout under a canopy of Japanese acacia trees while the fountain in the roundabout alongside tinkles away.

But what if the weather’s foul, or it’s the middle of winter (as it was when I last visited)? Don’t fret. Drinking inside is just as fun. In keeping with its beatnik Lavapiés surroundings, El Pedal’s interior has a rough-around-the-edges, bohemian streak. The furniture and shelving is made from recycled pallets and industrial-sized bobbins, and the back wall is blanketed with a vibrant hand-painted mural – bike and beer themed, of course. The low-fi look is a welcome point of different, with most of Madrid’s other craft beer bars veering towards a more polished, vogueish vibe.