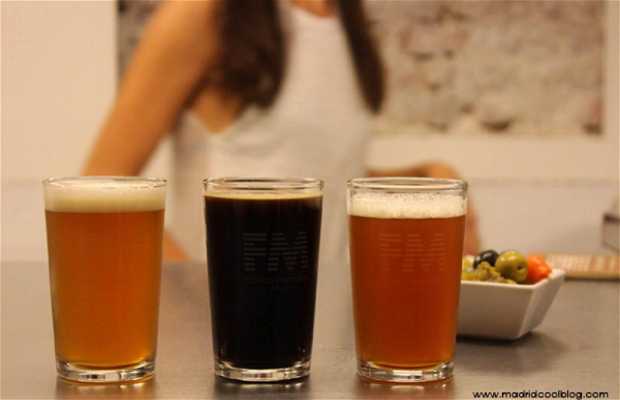 One of Madrid's Best Pints

The Fabrica Maravillas serves one of the best pint's in Madrid's hip Malasaña neighborhood, and is one of the leading figures (as James mentioned in his wonderful post above) in Madrid's fledgling craft beer scene. What sets Fabrica Maravillas apart is that rather than offer a constantly rotating and head-spinning array for imported craft beers, it brews its own right there in the shop, experimenting and perfecting varieties like hoppy IPAs, sweet amber ales, refreshing wheat beers, and a creamy stout.

The place itself has a cosmopolitan vibe where you're as likely to meet an American or Australian as a local Madrileño.

Freshly-brewed beer while you watch

Waltz into Fábrica Maravillas bang on opening time and you’ll notice the faint, sweet whiff of fermentation. It’s a warm, yeasty welcome to the best of Madrid’s two brewpubs (the other, Naturbier, in Plaza Santa Ana, only does a couple of beers and the faux German beer-hall decor really rubs me the wrong way). By day American brewmaster Dave works his magic amongst the stainless steel vats (visible through the big glass walls) and by night the factory transforms into a bar, filling with a curious mix of beer-geeks, beautiful people and anyone else who’s washed their hands of Mahou.

“We wanted to create a space where people – even occasional beer drinkers – feel welcome and comfortable,” Hernando, one of the six owners (all of whom are local to the barrio), told me the week they opened. Old-school beer bars – dimly-lit wood-lined caves, crammed with a dizzying array of difficult to pronounce beers – are intimidating to the uninitiated; to the non beer-geek. And the last thing the Fábrica Maravillas team wanted was to intimidate Madrilenians, most of whom have been raised on light, industrial lagers. What they’ve achieved is almost zen in its minimalism. With pale wood benches, ivory walls and white-washed exposed brick, Fábrica Maravillas is an inviting, luminous and utterly beautiful place to drink.