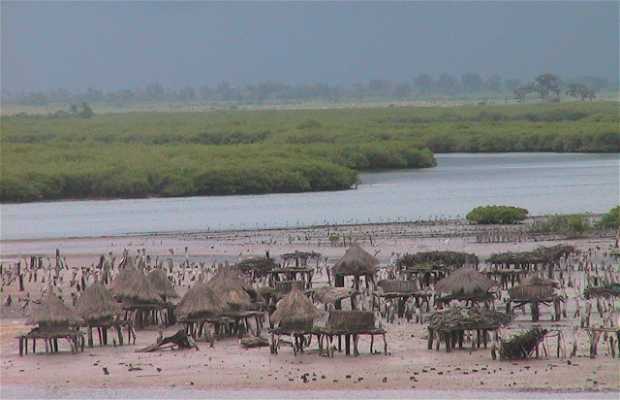 This town is actually three towns: it features three artificial islands born of sedimentation of thousands and thousands of living cockle shells, collecting them from the mangroves of the river, (and some tourism, which is beginning to grow because people are taking an interest in the uniqueness of the place). The village itself is actually an island, the only Catholic place in a predominantly Muslim and animist nation. Another is the cemetery island, joined to the town by a wooden bridge. The last island is not yet properly built, as it is a collection of huts in tall silos used as a food storage.

We got to the area of Island of Las Conchas where we were going to collect some shells first thing in the morning, because it was low tide. This let us to see one of the main activities of the inhabitants of the island and that is what gives the name: the cockle sand. The women were divided into groups and are filling the baskets. Meanwhile, the children enjoyed playing football

Fadiouth Island is a charming little island. I didn't want to go there at first because it seemed kind of touristy, but then I realized that it has its own essence, even with all the tourism, and if you go during holidays they'll dance Senegalese dances all night while accompanied by drums and welcoming people.