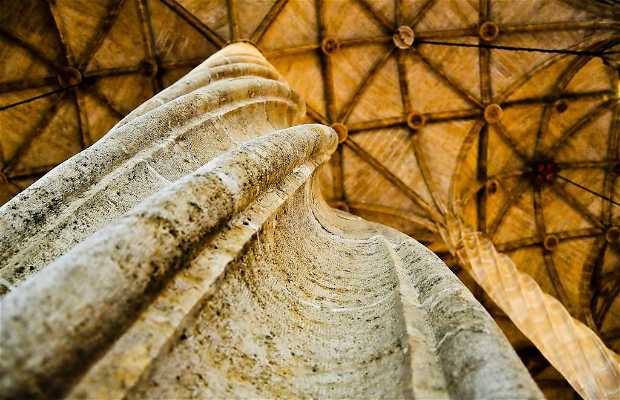 Example of the city’s power

This exceptional location, a UNESCO world heritage site, was built to facilitate trade in a period of economic expansion for Valencia. It is in the plaza del mercardo (market square), opposite the Church of the Two Johns, another work of art of the era.

The Silk Exchange was built between 1482 and 1533, and was used for the silk business, which contributed greatly to the expansion of the city. The room you enter first is the beautiful front office, where they set prices and is of a late Gothic style. It is a beautiful example of the power of the city at this time.

Later pass through the Patio de los Naranjos (Orange tree court) and another smaller room, which seemed to be some sort of restricted boardroom. The design of the exchange is inspired by that of Palma de Mallorca, built by Guillem Sagrera some thirty years earlier. The twisted columns and marble floors have been preserved very well.

The Merchants exchange was built in the city centre as a demonstration of power and also of what a great city Valencia was at the time. Opposite the Central Market and the Temples of the two Saint Johns, "Barri del Mercat" (District marketplace).

This corner has been described by many chroniclers of Valencia as a colourful and noisy scene equipped with a sensual charm, which is difficult to avoid. It is obligatory if you visit Valencia.

Details of its story

Magnificent building that stresses the shape of the columns to imitate the palm trees. Also noteworthy are the grotesquely formed gargoyles on the exterior. The tower served as a prison for merchants who had offended and in the upper part of the building is a phrase written in Latin which reminds them to behave or risk punishment. Some antique tables still remain where traders displayed their products and are on occasion put back in this room.

The Valencia coat of arms in this building predates the current one but does not display the double L "dos veces leal” (twice loyal). In this building

an historical point from Valencia

With an amazing arquitecture and some funny histories about, just in front from the central market is a perfect place to start your tour in Valencia .