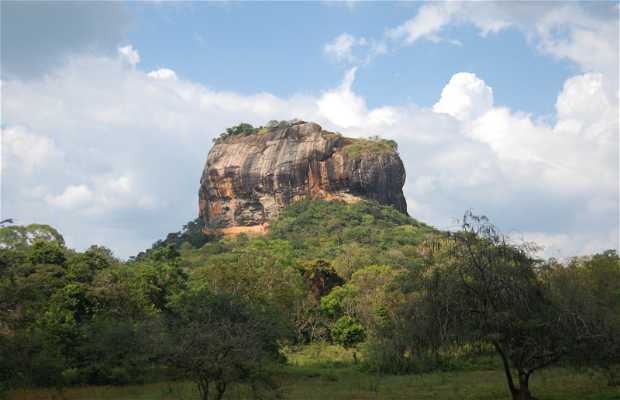 Sigiriya is an ancient palace-fort complex located on top of a massive rock which towers over the humid jungles near Dambullah, Sri Lanka. The caves found throughout the rock were originally used by ascetic monks as far back as 3,000 years ago, but the site didn't take on its role as palace-fort until the reign of the flamboyant King Kasyapa in the 5th century.

The site itself is really divided into three sections: the lower gardens, the middle landing (where you'll find the famous Lion's Gate), and the palace located at the very top of the rock itself. As you make the sweaty and, at time, vertigo-inducing hike to the top, you'll pass by manicured gardens studded with ancient pools, caves containing the famous Sigiriya Frescoes, the imposing Lion's Gate, and an endless amount of small side trails leading to unknown caves, hidden relics, and stunning lookout points.

Finally, after an hour of climbing, we reached the ruins of Sigiriya. They are situated on top of the giant rock that dominates the surrounding landscape. Going up is not as awful as it sounds, because it is very windy and that cools you down so you don´t feel so hot. Halfway up, you see a break in the wonderful cave rock paintings, and half an hour later you reach the top. The ancient capital city of Sri Lanka has been built as a series of terraces. It is a huge amount of work, and until now not very much has been discovered about the architecture and engineering of this place. You can see the remains of houses and administrative buildings of the city, plus a series of tanks that were used to collect rain water for the entire city. If you go down via the various terraces, you have to climb back to take the same road that you took to go up. At the bottom, in the museum, it is interesting to see the model of the rock and how the city is organized.

Lists and places related to Sigiriya

Links to Sigiriya
Hotels near Sigiriya Of Cultural Interest in Sigiriya
See something odd?