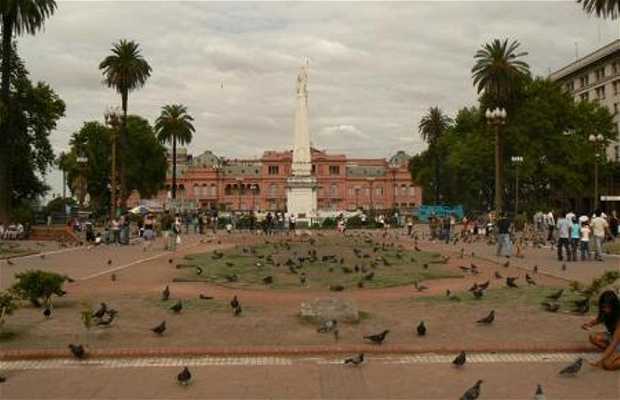 +70
Hipólito Yrigoyen s/n Address
Do not wait to book your activities
Buenos Aires by Night with Dinner
$129.65

Located in the historical district of Monserrat bordering the district of San Nicolas de Bari, the Plaza de Mayo was occupied in 1661 by Jesuit buildings that have now been demolished. This religious group arrived at the time of the Spanish conquest to evangelize the inhabitants of the continent. The Plaza de Mayo has held markets, executions, fiestas, and bullfights, but mainly it was the meeting place for traders, a place where you could buy candles, fish, armadillos, and chickens.

It is also where, on May 25, 1810. Argentina took its first step towards freedom and where in 1860 the Constitution was sworn in. The modern square was designed in 1902 like Independence Park in the city of Rosario by the French landscape architect and naturalized Argentine, Carlos Thays, famous for using palms trees from Rio de Janeiro. The square has two fountains and an equestrian statue of General Manuel Belgrano in bronze on a granite pedestal. The body was made by French sculptor Albert-Ernest Carrier-Belleuse and shows the hero holding the flag in the act of taking an oath, while the horse was sculpted by Argentine Manuel de Santa Coloma, who was born in Argentina Embassy in Paris.