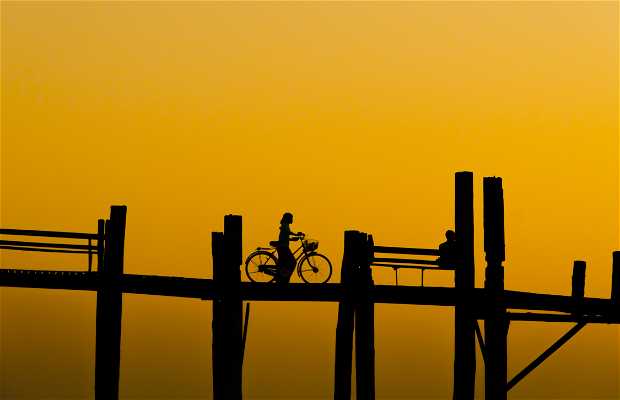 111 photos of U Bein Bridge

21 reviews of U Bein Bridge

U Bein Bridge is 1.2 km in length. 100% of the pedestrian area is made of teak. The same applies to much of the structure where they put boards. U Bein Bridge crosses Lake Taungthaman, connecting with Amarapura to join the two parts of the town. This bridge was constructed using teak from abandoned houses in the Sagaing e Inwa region. Looking at the picture on Googlemaps, you can get an idea of ​​the length of the bridge.

Sunset on the Bridge of U Bein Teak

U Bein Bridge is the longest teak bridge in the world, over 1.2 km and crosses the lake Taunghthaman (named for an ogre ve, according to tradition, came there in search of Buddha). The name of the bridge is usually attributed to the mayor of Amarapura, when he moved the capital to Amarapura in the year1841. The wood comes from an Inwa palace, which was abandoned. Some suggested reusing wood to construct monasteries, but the mayor decided that the wood that was there couldn´t be used by the monks.

Lists and places related to U Bein Bridge

Information about U Bein Bridge