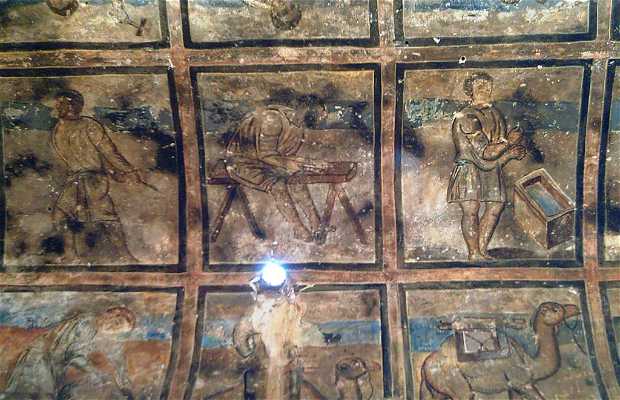 King Rodrigo was the last Visigothic king of Spain, the King of Persia, King of Abyssinia, the King of India, the emperor of China. All of these Kings had one thing in common, they were all an enemy of Caliph al-Walid I. When you see the small castle, you may feel a little disappointed (I did, anyway), but when you enter, you'll be absolutely amazed to see the frescoes which are preserved inside. Quseir Amra, was built in the early eighth century, and was used as a hunting lodge and break to enjoy its hot springs. There are several rooms, all decorated with frescoes and assume that at least was painted by two different artists.

Stands out in the beige Jordanian desert landscape

Quseir Amra, or Red Castle, gets its name from the reddish stone of which it was built, and which stands out in the beige Jordanian desert landscape. It was built by the Umayyad dynasty between the 7th and 8th centuries, and used to function as a fortress and recreational villa. This beautiful complex, whose only part left standing are the haman, or baths, have paintings that adorn the walls, which have been restored and funded by the Spanish Cooperation. It has great beauty, not only do the the figurative representations of exceptional events in Islamic painting surprise, but so does the erotic

Links to Qusayr Amra
Castles in Amman
See something odd?