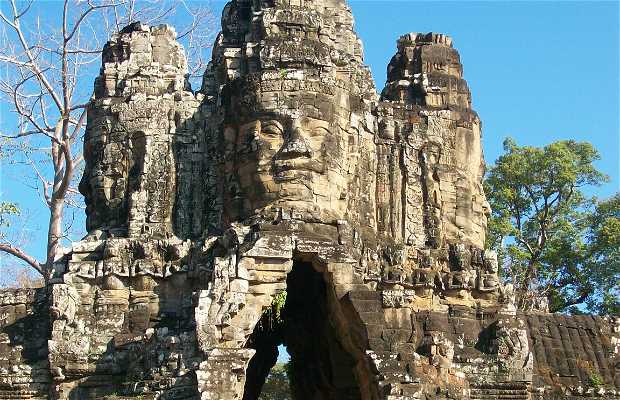 Angkor Thom was the royal city built by the Khmer Buddhist King Jayavarman VII, in the 12th century. Its name means "the big city." It has a square shape, 9 square kilometers, that you can explore on foot, but with the heat and the distances you'll be travelling to visit the temples, it can be a lot. It's most convenient if you only rent a bike for the day, worth 2 euros at most, and will be completely free. Also if you go with a group you can hire a cab with a driver that will take you around all day, but it's a bit more expensive, but avoids the cab drivers looking at you every time you want to change temples.

Driving into Siem Reap, the city at the edge of Angkor’s temples, we see gargantuan five-star hotels spilling onto the paved road garnished with luscious multi-coloured lights. It is mid-December. The hotel proprietors have gone to great lengths to make North American and European tourists feel at home – nativity scenes grace the lawns, strings of red and green lights hug the trees. It is Christmas in Cambodia. Irony falls like a hammer: We go to a place whose contributions to mankind’s creative prowess overshadowed anything the West could muster at that time. During the six centuries of the Angkorian Empire, the Khmers produced architectural works of such staggering ingenuity and creative brilliance that it is arguable whether they have ever been surpassed. And yet, today, Cambodia tries to placate its tourists, hungry for their money and good words. Standing on Angkor Wat’s central tower, overlooking the bustling city, the reservoirs, canals and causeways, the intricately carved sandstone, and the massive temples, could Suryavarman II, Angkor’s greatest king, have seen his end? I wonder if in 500 years Cambodian tourists will flock to the remnants of the Statue of Liberty or the Eiffel Tower and gawk at their faded beauty. Will our governments greet them in a manner befitting Shiva or Buddha? After all, only the dead truly know that nothing lasts forever.

+18
Like
Have you been here?
Add your opinion and photos and help other travelers discover