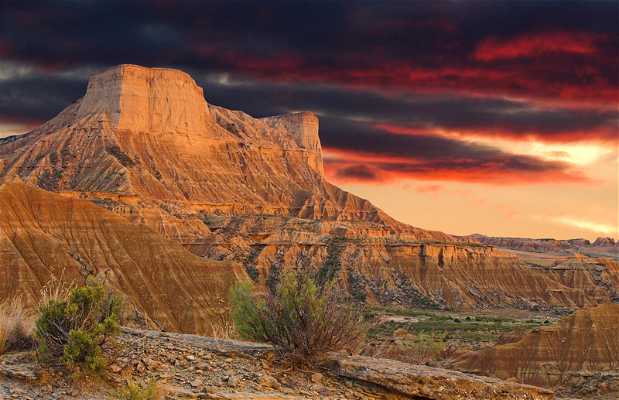 There are impressive places in Spain, such as Las Bardenas Reales, a semi-desert landscape that reminds one of westerners. Here is where movies such as Airbag, and James Bond were filmed, for example.

In this natural park and biosphere reserve we must stop at Castildeterra.

The mountain’s peak has different forms, depending from where you are looking at it. The northern part, known as Bardenas Blancas, has a path that surrounds the park and takes you to the most interesting places.

To get there you have to take small agricultural paths, closed to the public traffic, so I recommend that you are prepared to walk, cycle or book an excursion around the area.

Declared Natural Park and Biosphere Reserve by UNESCO, Las Bardenas Reales await on the other side of the Ebro. You cross it, drive a few kilometers and it seems as if you are in an unreal place.

In the north of La Bardena Blanca, the land is white and yellow, depending on the time of day and the sunlight. On the South it is red. You can barely see the color green.

The air is dry, there is silence everywhere, the north wind is constantly blowing. Can a place with this characteristics be beautiful?

The desert awakens in many people an enormous attraction, and Las Bardenas is similar in this way. Of course, the desert has sand, and here it is more like a dusty land. There are no dunes either. The formations seem as if they were sculpted by a talented sculptor. But the artist’s name is Erosion and it never stops working. It slowly and constantly changes the forms of his pieces of work.

When people think of Navarra, they imagine a green place, with a cool weather and mountains, where they have a delicious gastronomy, thus making it a perfect place for a weekend getaway. But Navarra also has unexpected surprises.

It is true that some parts are green, but there is a secret place that will amaze you: a dry and arid place different to what we imagine Navarra to be.

In the south there is a natural park called Las Bardenas Reales, which is beautiful. It is a desert with little water and shade. The mountains have been shaped by erosion, and they constitute a peaceful and silent landscape. It is great to walk from the plain to one of its peaks to admire its great size.