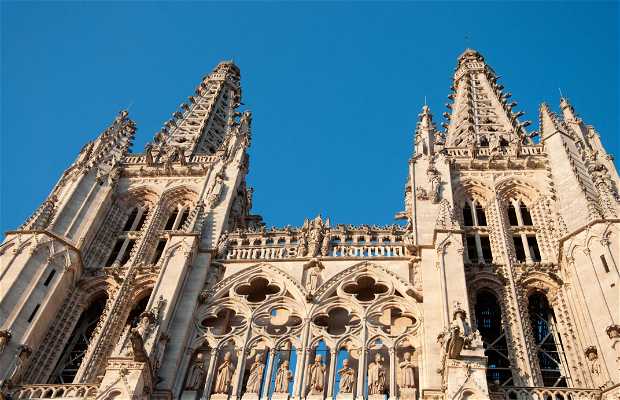 Construction on the cathedral in Burgos began in 1221 under Fernando III, the King of Castilla, and was dedicated in 1765 with the construction of the towers and the dome.

The long time it took to build this gothic cathedral gives it a unique architectural coherence due to the changes in styles and influences over the centuries.

It has four entrances. The basilica has three chambers surrounded by thirteen precious chapels and a cross chamber that measures 70 meters wide. It is the same height as the central chamber and forms a Latin cross.

A pinnacle of Spanish gothic architecture

It’s one of the pinnacles of the Spanish gothic era. This structure was built over a pervious Romanesque structure. You can actually distinguish two different styles in the building: pure gothic and flamboyant gothic.

Construction began in 1221 at the hands of the maestro Enrique. The building, in its first stage, had three chambers with a prominent transept, a polygonal apse, and a head that opened to a series of chapels.

This cathedral would maintain its form until the 13th and 14th century, but, afterwards in the 15th century, it began to change thanks to Juan de Colonia and his son, Simon. The father and son pair introduced the Germanic flamboyant gothic style to the cathedral. The build the towers’ steeples, the Condestables Chapel, and the dome.

I’ve been studying in Burgos for five year and up until yesterday, I hadn’t seen the Cloister of the Cathedral of Burgos: simple amazing. Not just that, but I was also lucky enough to see it at night, as it was the “noche en blanco” (white night – a night that happens once a year when all the museums opens and open-air activities take place across the city).

You can see some bells made of black glass decorating it high up; from Javier Pérez’s “Voces y Signos” (Voices and Signs) exposition, that was accompanied by works from Alberto Corazón. They’re two young Spanish artists.

If you have the opportunity to visit the cloister, do it whether there are bells or not.