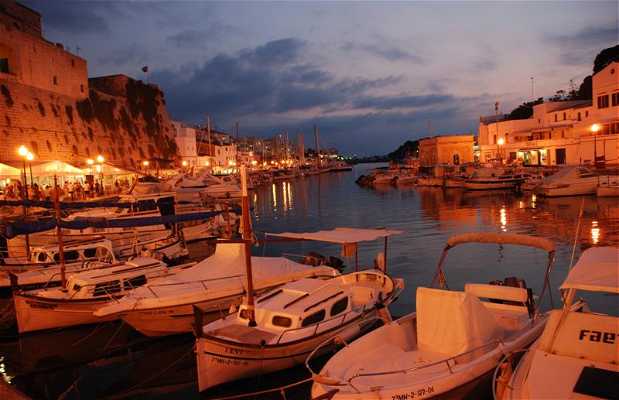 The pearl of Menorca

It’s the most beautiful city on the island. Its old quarters still conserves the medieval layout with narrow streets, cobblestone streets, churches, and noble houses with cute facades, small squares that open up at the end of the street.

The port is very pretty, although dining in that area can be expensive.

On the westernmost point of the island, the stately Ciutadella (or Ciudadela) is a fascinating surprise. I never in my life imagined that the island had such a city. The charming area around the Plaza des Born houses fabulous and colorful Neoclassical buildings and palaces like those of Vivó, Salort, and Saura. The city was capital of Menorca until 1722 and today has a wonderful old town with white-washed buildings, narrow little streets, and small homes with asymmetrical windows.

It’s enchanting to stroll under “Ses Voltes,” the beautiful arcades of the Arab court on José M. Quadrado St. and Plaza Nova, and see the picturesque Mercat (market) and have a drink in one of the bars in the medieval Plaza de la Libertat.

Saint John’s fiesta in Ciutadella not only attracts people from the island of Menorca (who thoroughly enjoy it), but also brings people from other places, mainly Mallorca and Cataluna.

It’s believed that it because as a religious festival in the 15th century. All four classes of the ancient Menorcan sociedy were represented, but those known as “ Caixers,” the nobles, the men of the church, the artisans, the peasants.

The festivities begin the day of the “be” (lamb) at 9 in the morning, when the first note of the flute is played in front of the “ Caixer Senyor” palace (representing the nobles).

Saint John’s festival (June 24th) in Ciutadella is as important to Menorca as the San Fermín festival (running of the bulls) is to Pamplona. It’s a fascinating festival from all points of view – photographic, cultural, and party-going.

It’s a party that will get you moving: the environment on Saint John’s day is something that will stay with you forever.

This is Menorca’s second most important city after Mahón and has a knightly air. In fact, the majority of the old town is still in the same shape as when it was built. There, you’ll find the main attractions on the island, like the Cathedral of Menorca, the Castle of San Nicolás, and the port.

It’s really worthwhile to get lost among the narrow streets, wander through the arches, and admire the local architecture.

Maó and Ciudadela are unlike any other Spanish cities. The unique history of the island has given it a unique atmosphere; very aristocratic with even some foreign influences.

Ciudadela houses a pretty and compact old town that is a joy to discover on foot. The gothic cathedral built on the ruins of an old mosque, the Borne square and its old palaces, the magnificent theatre, the Plaza de la Esplanada, and, of course, the port are all places you can’t miss during your trip to this wonderful Menorcan city.

Lists and places related to Ciudadela