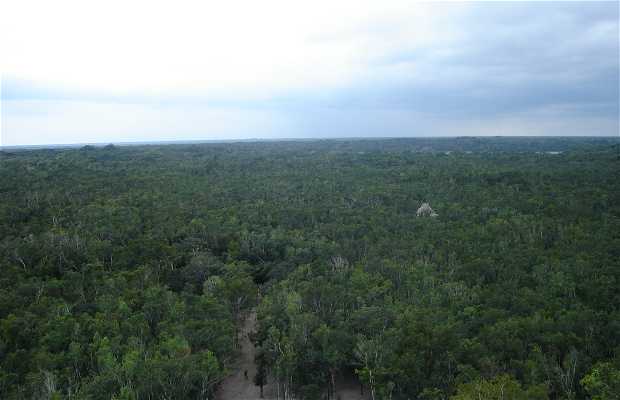 The city of Coba is one of the larger Mayan complexes found in the Mexican Yucatan Peninsula. It is located about 40 km from the city of Tulum. It was built in the classical period, between the sixth and ninth centuries. Then it decline due to the importance of Chichen Itza. The entire assembly is dispersed, forming multiple cores about 5 lakes, the largest being Coba lagoon and has the charm that buildings are immersed in the jungle. Although only a small part has been discovered, the archaeological site is very extensive, so it is possible to rent bibicletas to move along the paths. We prefer to do the walking tour and visited only a small part, but walking through this huge complex of ruins where the pyramids and other large buildings are mixed with large trees and sometimes the roots break the stone cracks appear in amid the ruins is like being in the middle of an adventure of Indiana Jones.

I was traveling through southern Mexico instead of making the typical tourists stops (sun and beach) and I went to the cheapest hotel in the area and rented a car and spent a week traveling across the Yucatan jungle. I loved the area and I´ve gone bak 3 times in just the last 2 years.

I recently went on an expedition with Coba Sunset to a beautiful Mayan city. If you're in search of a bit of adventure then read on.

It was a morning like any other: got up late, banged my knee on the kitchen cabinet on my way to the coffee machine and ended up drinking a cold brew by spending too much time in the shower. Fortunately, the Coba Sunset team was waiting for me at the van and we drove off, if in not a hurry, at least in a cheerful mood.

It takes a good forty-five minutes to get to the Mayan city and Jesús, the group's tour guide on the day, had a special type of comedy skills that made the road-trip alone worthwhile. I could tell you that he's a funny guide but it somehow doesn't quite capture his personality.

Lists and places related to Coba