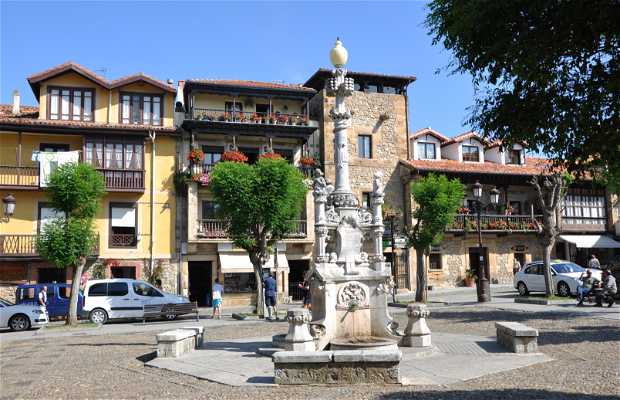 At the end of the 19th century, Comillas was gorgeous: splayed out along a large sandy beach and surrounded by enormous cliffs battered by the pounding surf. Life in the town revolved around the small fishing port and the historic district with its arch-lined squares, cobblestone alleyways, and homes of noble families.
The Villa de los Arzobispos, named such for having been home to numerous prelates, seduced the first Marquis of Comillas who undertook works to embellish it even more. That’s how Gaudí, Joan Roig, Cascante Colom, Joan Martorell, Llimona i Bruguera, Vallmitjana, and Lluís Domènech came to leave their marks on some the most important Modernist buildings in Cantabria.

The first time I went to this wonderful village, I was amazed, as you enter you see a dazzling building (the Pontifical University of Comillas), but after there's also the house of the Marquis of Comillas, the Pantheon, and Gaudí's Capricho! It's amazing that we saw so many wonders together, and the people... the stone streets, the beautiful houses of stone and wood...all perfectly kept up... the fishing port, Comillas beach.... all in all, a beautiful town with lots of charm.

When I found out that there were works by Gaudí in Cantabria, I took a visit to see for myself.

We were heading to Santillana and passed by a town called Comillas about which we had seen plenty of excellent recommendations on minube. The buildings in this town were erected by one of the most wealthy and influential men of that time, the Marquis of Comillas, a millionaire of humble origins.

In the end, I saw that Gaudí was just one of many worthy Catalan artists who had formed part of the history of this curious little Cantabrian town.

I’d suggest taking a guided visit of the Palace of Sobrellano and the University.

Lists and places related to Comillas

Links to Comillas
Hotels near Comillas Villages in Comillas
See something odd?