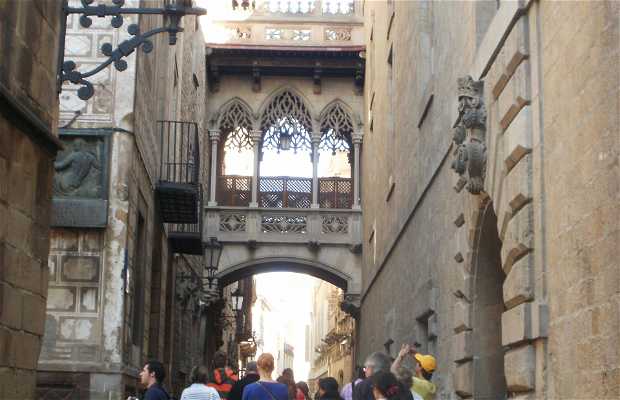 Historical richness and influx of business

One of the most emblematic and representative neighborhoods of Barcelona is the Barrio Gótico, the Gothic Quarter. This area is very well located and quite accessible from any part of the city.

It encompases what one could call the old part of Barcelona, there you have many monuments of great heritage and historical value, from medieval buildings and squares, to real relics of the Roman period.

One of the most interesting features is that walking only a few minutes one can see buildings and squares of different time periods. The most outstanding building is the Cathedral of Barcelona, one of the lovely Gothic constructions on a central square.

The Gothic Quarter of Barcelona is the Eastern part of the Ramblas, the old part of town, where the streets are narrow, the center is pedestrian and it is always so packed it is sometimes hard to walk.

You'll get lost in the streets at first, but you'll catch on soon enough. From little square to small streets, from church to bars, the neighborhood surprises you. You'll definitely never get bored. You can't miss the magnificent Cathedral of the city and various gothic-style churches.

You can climb the tower of the Cathedral to get a panoramic view of the rest of the neighborhood. There are also various museums, Plaza del Rey with the museum of the city for example. Plaza del Rey is one of the most beautiful squares of the old neighborhood. There is also the Palacio Real Mayor, the Palace Chapel, the Palau de Lloctinent, the palace of the owner, which had the archives of the crown of Aragon.

Soaking up the essence of Barcelona

Each spot, each street, each stone makes you vibrate with a different story. Going through the streets and mixing up with the people is soaking up the essence of this old Barcelona, so many times described and with so many things still to be discovered that no visitor can remain indifferent.

Small but biutiful part of Barcelona

Small but biutiful part of Barcelona, impressive background, it gives you a feeling of walking old street, touristy but nice

Beautiful piece of the city, full os secrets to explore