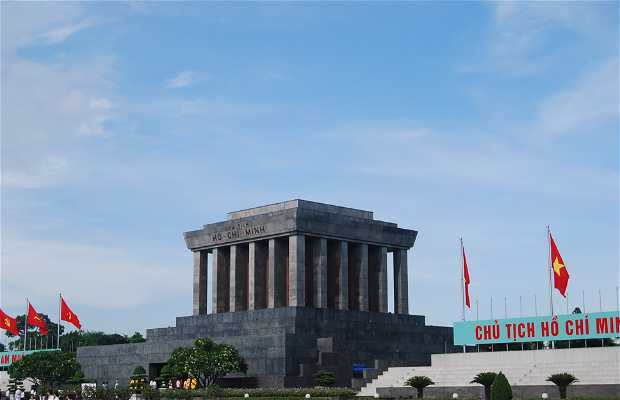 The most traveled corpse in the world

The mausoleum of Ho Chi Minh is a pharaonic structure in Ba Dinh Square and holds the preserved remains of the leader of the Vietnamese revolution and the father of modern Vietnam: Ho Chi Minh. This magnum opus was built in 1975 and reminded me of the tomb of Che Guevara in Santa Clara, Cuba and even that of Lenin in Red Square when I visited during the Soviet era.

Ho Chi Minh had wanted for his remains to be cremated, but his successors disobeyed his will in the belief that such a famous character should be eternally present and revered by future generations. To keep his spirit alive, they decided to display his corpse in this mausoleum, no doubt inspired by the case of Lenin. Vietnam is not known for its mummification techniques, so the body is transported to Russia every year for "maintenance." Therefore, the mausoleum is closed in the months of October and November when to body is transported to Russia (this is why it's said that the corpse is most traveled of all time).

It is located in the large square called Ba Dinh Square where you must wait in line to enter the mausoleum. Inside, you'll find the mummified remains of Ho Chi Minh which are guarded by soldiers. Outside, the heat is awful and when you enter you get cooled off by the arctic temperatures necessary to conserve the corpse. It's a pretty quick visit and all very solemn. They scolded us for almost everything, to keep your hands clasped behind your back and your arms close to your body, stay in line, and keep your sunglasses on while waiting at the entrance. We had to be almost as still as Ho Chi Minh himself.

The remains of Ho Chi Minh

This is an imposing building and, as others have mentioned, the rules of conduct are very strict. There is a yellow line which you can’t cross (not even to snap a photo) and the Royal Guard will definitely let you know if your behavior is out of line. Tip: watch the time. If you want to visit the interior of the mausoleum, don’t arrive any later than 11:30 in the morning.