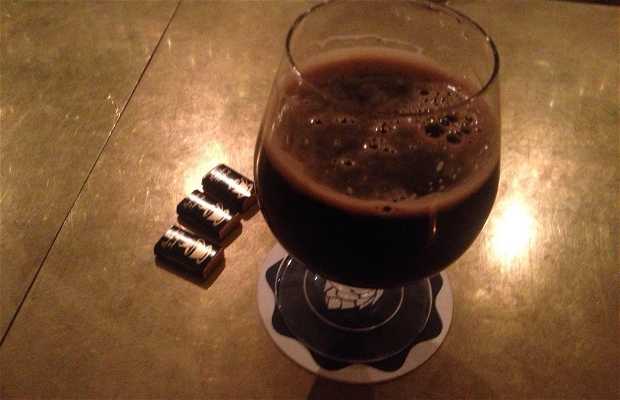 Located just around the corner from the popular micro-brewery Fabrica Maravillas, Irreale is a warm, jazzy alternative if you're looking for a good beer in downtown Madrid. They have a solid beer list (not sure how many, but at least 30) and a rotating line-up of good beers on tap, ranging from fruitiy Belgian brews to lip-puckering American IPAs and locally-made offerings from Toledo's Dolmus brewery.

They also serve food which, as neat and "brewpubby" it might be, seemed a little scant for the price.

You’re now crossing into Ballesta. The name means “crossbow”, and it’s an appropriately arresting moniker for this small sub-barrio north of Gran Vía, for many years a downtrodden maze of dank backstreets, sweaty pimps and past-their-prime prostitutes. But fear not. In the last few years the area has been reclaimed, revitalised and re-baptised. It’s now called “TriBall”. And within these not-so-quiet streets lies Irreale – officially, by a few months anyway, Madrid’s first craft beer-only bar.

If you like your drinking holes dark, then Irreale is right up your alley. This often-bustling bar is long, narrow and deliciously low-lit. But it’s not a cave; the warm bamboo-toned walls and big brassy bar seem to give off a burnished golden glow. And the mix of jazz and blues on the soundtrack sits perfectly with the decor. Upwards of 30 different bottled beers line the wall – BrewDog, Mekkeller and Lost Abbey, among others – and six regularly rotating taps make this an excellent stop on any Madrid craft beer pilgrimage. Space permitting, they want to add two or three more taps pronto.