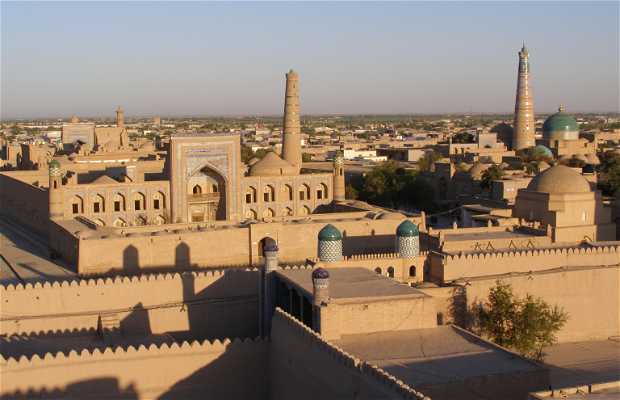 Khiva is one of those beautiful, amazing, peaceful, magical places. Its center forms the town-museum of Uzbekistan and the end of the ancient Silk Road. Khiva is an architectural marvel of mud brick, dotted with tiles. There is up to 16 madrasas, mosques, tombs, palaces, caravanserais, well preserved thanks to a conservation program of the Soviet Union in the 70's and 80's. Today, if I'm not mistaken, it is a UNESCO World Heritage Site. Today you can see how, almost in the shadows of its walls, some locals kill a lamb, probably for a family celebration, how woven silks are dyed and couples get married.

Between rich times and others

This city is in the southwest of Uzbekistan, in the province of Khwarezm. The former capital of the historical region of Khwarezm, and the Khanate of Khiva. Other names include Jorasam, Khorezm, Juarezm, Khwarizm, Juarazm, Chiwa, Chorezm, etc. According to legend, Jiva was founded in the place where Shem (the son and Noah) Keivah dug wells. Jiva was, until the early 20th century, the capital of Khwarezm, which was a vassal kingdom of the Persian Empire. The region, particularly arid, developed a complex irrigation system from the second millennium BC and was occupied by different conquerors: Persians,

Lists and places related to Khiva

Links to Khiva
Hotels near Khiva Historical Monuments in Khiva
See something odd?