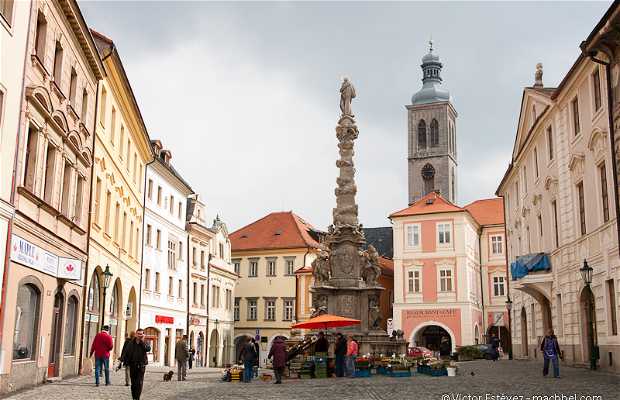 Kutna hora is most famous for the Unesco listed

And somewhat ghoulish Sedlec ossuary. An entrepreneurial monk brought soil back from the holy land and spread it over the site. This made the site popular for burials. In order to make room for new burials, older ones were exhumed, which resulted in an excess of 40,000 human skeletons. These have been artistically arranged within the church.

More aesthetically appealing is the historical town centre. The town was extremely rich due the presence of a silver mine. The cathedral with it's flying buttresses is a fine sight, however it took while to reach this state. Construction started in 1388 and finally finished in 1905.

70 kilometers east of Prague one can find this city named a World Heritage Site by UNESCO, which came to rival the capital of the country in economic, cultural and political life into the 16th century in large part due to the silver mines that are in the area (which can be visited). Among the monuments, stands the Cathedral of Santa Barbara (open until 18:00 during the summer), originally Gothic with Baroque touches. Other sights to visit are the House, the Chapel of Corpus Christi (open until 17:00 in summer), the Royal Castle also known as Patio Italian, the College of the Jesuits, the Fuente