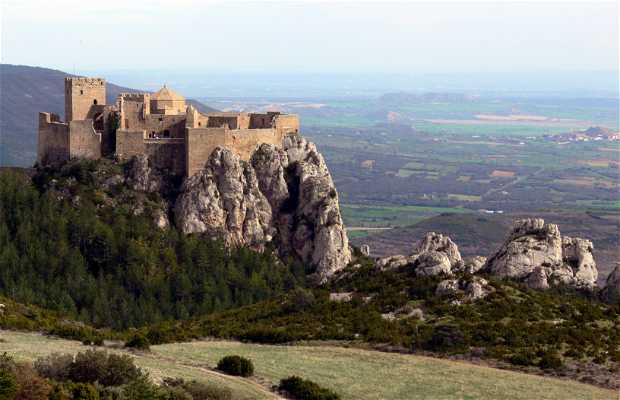 Loarre Castle is perhaps the best preserved of its age. Situated in a privileged enclave at the foot of the Pyrenees in the province of Huesca, from its towers you can make out the valley which goes as far as the city and much further than that. I was originally designed to control the route to the Aragonese valleys. However, if there is something for which this castle is known, it is that here, Ridley Scott filmed some of the scenes in his film “Kingdom of Heaven”. But this castle is much more, it’s a very beautiful environment. The ascent at the rear of the castle to the car park, and then a

Loarre Castle is an impressive example of a Romanesque castle, situated on a mountain above the village of the same name. Loarre is 35 Km from Huesca and from the castle you catch sight of impressive views of the plains in front.

The castle was constructed on a lump of rock and you can see it from the distance. It is in quite a good state of preservation and has a nearby building with a bar, shop and information office.

It was here that they filmed part of the Ridley Scott film “Kingdom of Heaven”, starring Orlando Bloom, Eva Green and Liam Neeson among others. If you are in Huesca

As impressive and suggestive as the nearby Mallos de Riglos, but for different reasons, the vision of the Loerre Castle leaves you with your mouth open. The fortress, perched over the rocky peak over the town of Loarre, seems as if it was built by a divine hand. The building is from the 11th century (it barely has been remodeled since) and it is so impressive both from a distance as from its solitary enclave. The landscape seems to cover the whole world.

It is an impressive castle, one of those places where time stopped in medieval times. It is an icon of the Spanish heritage.

For me, the quality of the guide was really good, and everything he told us was very interesting.