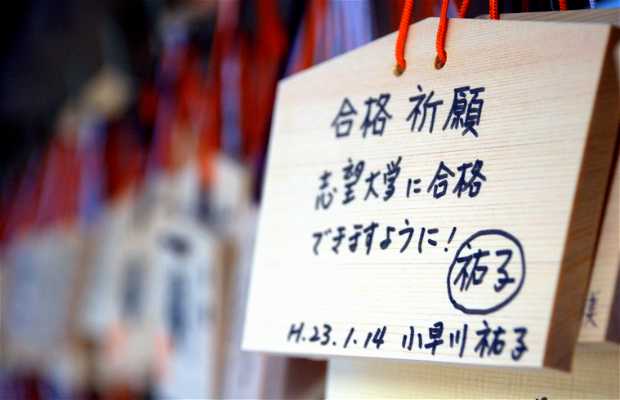 This is without doubt one of the most "traditional" shrines in Tokyo. It's here that I saw a traditional Japanese wedding, which are held here almost every weekend. The shrine is Shinto, the traditional religion of Japan, which deals with spirits of mountains, forests, rivers, etc. This religion is one of the reasons why the Japanese have names dealing with nature such as ... "beautiful flower", "deep sea" or simply "river." This shrine honors the memory of Emperor Meiji, the first of the "modern" Japanese emperors, who opened Japan to the outside world in the late 19th century. This modernization process of the religion started centuries ago when Buddhism arrived in Japan and instead of creating conflict, the two religions arrived to a coexistence that exists to this day.

Most beautiful Shinto shrine in Tokyo

Meiji Jingu is the most beautiful Shinto shrine in Tokyo. As you can guess from its name, it was built in honor of the Emperor Meiji. The enormous "torii," the door that marks the entrance to the shrine, is truly impressive. The entire park that surrounds the shrine is also wonderful in summer and is a great place to go and relax in the neighborhood of Aoyama.

Beautiful place to visit. Make sure to go early or the surrounding gardens and areas might be closed. Don't forget to get your stamp from the many stands around the Shrine.

Relaxing visit in March 2015 dedicated to the Emperor Meiji