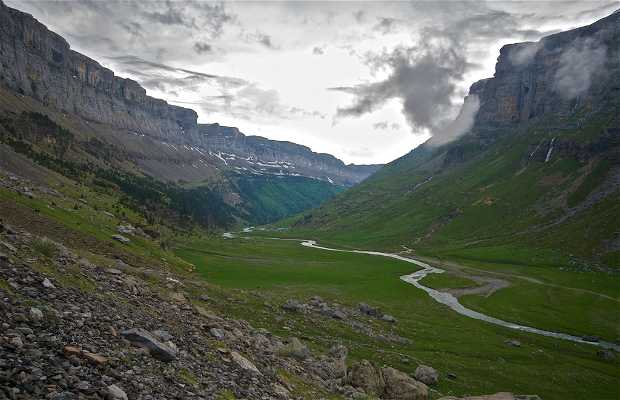 Raining. It was like this that dawn broke on the day we had decided to go up the Ordesa Valley on a photographic walk which would last 5 hours. I read that going up the valley and coming down was a question of 5 hours. It took me more than twice the time. I took photos of everything that seemed interesting and worth seeing.

It is a really fascinating place. Along the way I crossed paths with a fellow photographer who was surprised to see a GPS attached to a camera, and it was clear that he wasn’t bothered.

After about 3 hours, I had arrived eventually in the tourist part of the valley, "Cola de Caballo". However, the best photos were still to come. After an hour and a half ascent, I met the same group as before who were now descending. “Is it far to the refuge?” “At least an hour”. They were now returning but I knew that I was so tired, that I would have to spend a night – a wasteful night - in the refuge in the high mountain. The photos, overwhelming. Just getting there I found a beautiful plain with some ascents, they were frozen and I occasionally put my foot in the ice, but it was really beautiful.

How nice it is to get lost in the forest of the Ordesa National Park. Is like being in a living painting. I recommend it to you! And then visit the surrounded villages: Buesa, a charming village, with views that are more than relaxing… Come on, lose yourself here!