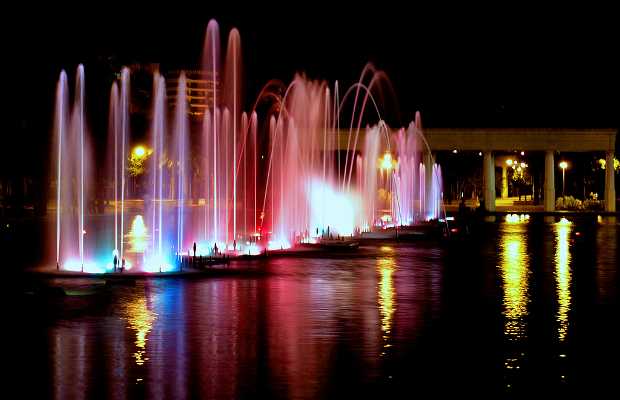 The Palacio de la Musica in Valencia is built on the old Turia River basin. The river dried up years ago and they built a garden and several cultural buildings in its place, among them the Palacio de Música. It is adjacent to an artificial lake, built by Ricardo Bofill.

The palace was designed by architect Jose Maria Paredes, and is considered one of the most important of the region. Noted for its large stained glass windows, a large dome for the concert hall, the space much larger than the other concert sites, and above all for its beauty. Acoustics are some of the best, not just according to the owners, but also those ve’ve sang or played there, such as Montserrat Caballé. The palace now receives over 500,000 people a year, and they come from afar for operas and concerts.

When night falls, this fountain, located on the River Turia in Valencia, offers a spectacle of water, lights and colour that bewitches you for a while. It is opposite the Palau de la Música in Valencia where various cultural activities related to music are held.