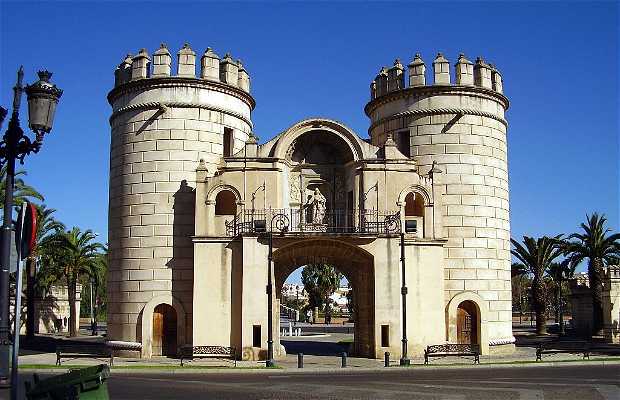 This gate located in front of the Puente de Palmas on the Banks of Guadiana River near the Baluarte de San Vicente is the true symbol of Badajoz. It was once the most important entryway to the city and the former home of customs control. In the 19th century, it was a royal prison. It looks like an Arch of Triumph with two enormous circular towers on either side of the central body.

The arch has two different facades, one for each side. The exterior façade (the one that faces the river) has the imperial shield of Charles V and a commemorative inscription. The side that faces the square has a sort of terrace and a niche with the image of the Virgin.

The Virgin and Angels of Puerta Palma

This is a work by the Badajoz-born sculptor and painter Guillermo Silveira García (1922-1987), recipient of the National Medal of Fine Arts. It was created in 1960 under the orders of architect Francisco Vaca Morales ve was then charged with restoring the monument. You can find more information on the artist at'http://www.pintorguillermosilveira.es.'