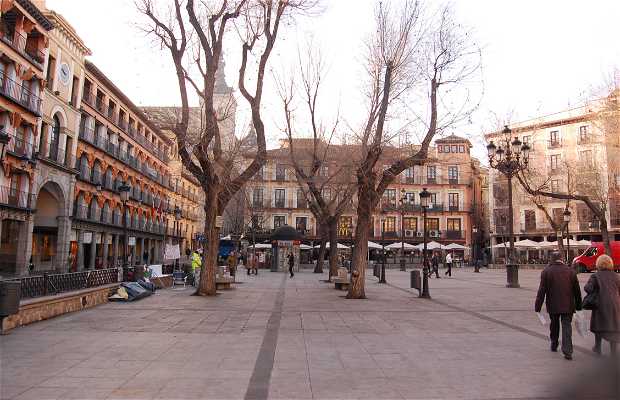 The Heart of Toledo

The Zocodover is the heart of Toledo. It is a meeting point for travelers and locals; it used to be an ancient Arab market.

Today, it houses in its arcades the tourist information offices and some of the most exclusive places in the city.

The original design of the square was designed by Juan de Herrera during the reign of Philip II, with the intention of expressing the dominance and hegemony of Spain.

The square is a perfect place to have the first beer of the day, as a meeting point or just to observe the daily life of the people of Toledo. The lighting at night is really beautiful.

When I arrived to the Zocodóver square or “market of the beasts”, since it used to be the place where the Arabs had their market, the guide told us that it was kilometer zero of the old part of town since from there begin all the streets of the city.

Located between the Roman wall and the rest of the city, it has a strange form and it is different to all the other squares I know. The Zocodóver building doesn’t match with the rest of the beauties in Toledo, it isn’t attractive at all. What distinguishes it is its clock and its top, which has a strange iron shell that holds some bells.

It has large stone benches and it is quite a lively place, surrounded by stores and kiosks. They say that the public bathrooms that the square once had where covered in 1970 and that they probably still have the painted ceramics painted by the local artist Ruíz de Luna.

This oasis of peace and tranquility before going inside the tourist hustle and bustle of the center of Toledo is also a breath of fresh air after going up the Cuesta de Armas.

What used to be scenery for faith trails and cattle markets is now a meeting point for excursions and visits to the center of the city. It also has many terraces to have an aperitif o supper and it is full of souvenir shops.