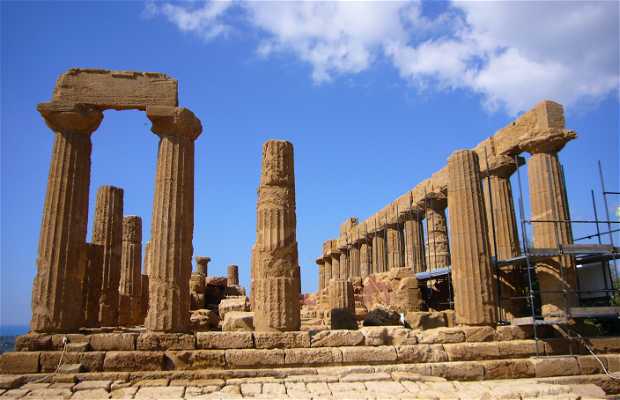 295 photos of Valle dei Templi (Valley of the Temples)

57 reviews of Valle dei Templi (Valley of the Temples)

Valley of the Temples

Absolutely stunning, the Valley of the Temples in the city of Agrigento has ruined walls and five Doric temples belonging to the ancient Greek city of Akragas. Situated on a cliff overlooking the Mediterranean Sea, the fabulous buildings, some of which date from the sixth century BC, seem as if put there as if on a movie set. They were built there to protect seafarers who sailed the seas and to guide them safely to the city. The Archaeological Park is huge,it is divided into two zones (East and West), and it also has an interesting museum and other middle ages buildings worth visiting. Because of its beauty and the monuments, the site was declared a World Heritage Site by UNESCO, is visited by many people.

Valley of the Temples at Night

The Valley of the Temples is one of those must-see places if you're going to Sicily. By day they're glorious to see off in the distance, but at night even though you can't see them perfectly because it's already closed. This place has a very special charm. When you cross the bridge at night carrying Agrigento, you can see them in the distance, lit amid pm, crowning the hills. We stopped at the door of the museum, to take pictures, but with the hidden beams and the lighting in the distance, it's difficult to take good pictures.

The Valley of the Temples is a wonderful place where you can see the sea through columns and impressively large structures, many of which are within walking distance of each other. Some have already been demolished, but do inspire thoughts about the impermanence of human creation.

Information about Valle dei Templi (Valley of the Temples)