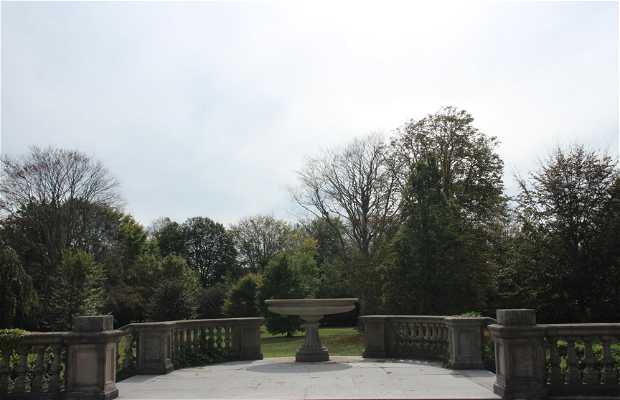 This house is ... gargantuan! No less than 70 rooms, including a ballroom, a music room, a library, living rooms, bedrooms, bathrooms ...! And throughout, it's laden with marble and gilt. This was one of the mansions owned by the Vanderbilt family, one of THE most powerful families in their day, who became rich thanks to the railroads. This is where the glitterati came for parties; even JFK stayed here.

I noticed 2-3 small details that amused and surprised me, with the help of the audio guide:

- A bathtub carved from a single block of marble, designed to resemble a Roman coffin. It was so thick that it had to be emptied and refilled several times to keep the water hot. There were four taps, two freshwater and two saltwater, as the latter was considered healthy at the time!

- The staircase of the house was built to look like the Opera Garnier in Paris! Moreover, even the guests enjoyed sliding down the banisters here!

- From the testimonies of former servants, we learned that people changed their clothes 6-7 times a day, sometimes taking two baths a day. Their sheets were changed twice a day, and towels were changed after each use.

Of the nine summer “cottages” now managed by the Preservation Society of Newport County, the Breakers is the most opulent. It’s hard to imagine people (even Vanderbilts) actually living in the elaborate rooms of this Italian Renaissance-style mansion. Taking a tour of the house and learning about its history and décor will either explain the phenomenon of the ostentatious residences built here in the 19th century, or make it all seem even more unbelievable.

Though the Breakers is the grandest, the others are no less amazing. Rosecliff (where the 1973 film of The Great Gatsby was shot) was inspired by the Grand Trianon at Versailles, while Marble House was modeled on the Petit Trianon.