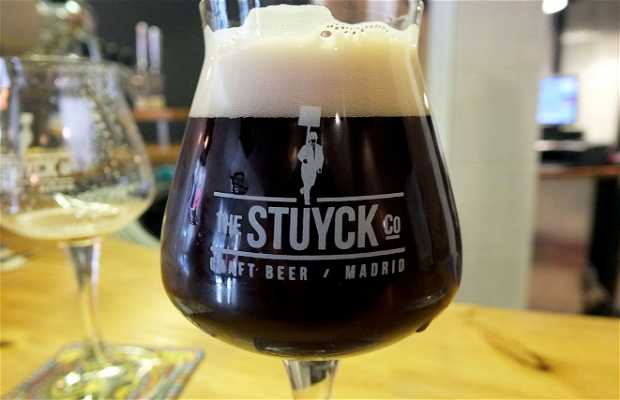 8 photos of The Stuyck Co.

1 review of The Stuyck Co.

The Styuck Co. is more than just another craft beer bar in Madrid. It’s a space that’s entirely dedicated to the enjoyment and appreciation of top-notch beers from around the world, a fact that’s evident in everything from the warm and helpful reception of the staff to the menu designed to pair well with specific beers on tap to the bar’s regularly-scheduled events which bring in experts from the worlds of craft brewing, home brewing, beer pairing, and more to share their knowledge and passion with local aficionados.

The first thing you’ll notice when you visit the Styuck Co. is that the interior is beautiful: exposed brick, original 19th century wooden beams, warm lighting, and a glorious bar with 14 gleaming taps. The second thing you’ll notice is the excellent selection of beers (they switch it up regularly so you’ll almost always find something new) which puts a clear emphasis on variety and quality. They even had a few beers I’d never heard of before, like a Black IPA from a Spanish brewery or, my personal recommendation, a Gose beer, an obscure German brew whose flavor profile falls somewhere between dry cider and white wine. We ended up getting a half pint of the Gose, a half pint of a Norwegian American Pale Ale (it was delicious), and a half pint of the bar’s own brew, the Styuck. The Styuck is an Imperial Red Ale which has tasty and smooth despite its 8% alcohol volume.

Lists and places related to The Stuyck Co.

Information about The Stuyck Co.