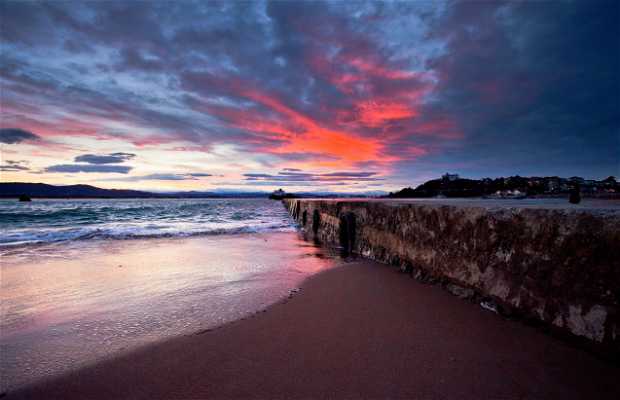 387 photos of Bay of Santander

80 reviews of Bay of Santander

I love the north of Spain

I know of few cities that combine beach and city as well as Santander. You can sit on the sand of any beach in Santander and it seems like you're miles from the city just lounging around with other tourists and beach-goers who are just there to enjoy the sun and the waves of salty water that heal the body and ease the mind.

But as soon as you leave the sand, you discover large urban avenues lined by clean, white sidewalks and asphalt.

Take a few steps from the beach and your swimsuit and sarong become increasingly out of place. The north is elegant by nature and the streets of Santander are sober but with a touch of character.

Connect with the Sea

Santander's beaches and bay are known for their great beauty. In fact, the bay is one of the most beautiful in the world and to really appreciate it, you need to see it in context. This is best done by boat, away from the coast, and in full contact with the sea. You can sail around the coast of Santander and Playa de Somo and enjoy the sensation of being at sea.

My experience was on a sailboat. The wind was in our favor and it was a perfect day. We sailed until Playa de Langre where we stopped the boat and took the opportunity to have a swim in the water of the Bay of Biscay. I'm not one for cold water but, honestly, I really wanted to swim again at that beach I had so enjoyed as a child. After your swim it's a joy to dry off in the warmth of the sun and feel the wind in your face. If you have good company, there's no better plan in the world.

Santander: "bride of the sea"

Santander, the "bride of the sea," has one beautiful bay. I also like the Paseo de Pereda, the path to the "Puerto Chico" (a small port in the bay with a breakwater protecting the imposing fishing boats), and the south wind, Santander’s traditional enemy which has since become the love of sailors and surfers.

Then you have the Paseo de la Reina Victoria, which runs from San Martin (a former fishing area) along the beaches of La Magdalena and Bikini (where the namesake garment was first spotted on foreign girls who came to study at the University during summer), and the Magdalena Peninsula,

Among the most beautiful

Santander Bay is the only bay in Spain considered one of the most beautiful in the world, and no wonder. There's its large size and deep blue water, surrounded by sand and green areas on almost all sides. From Santander or from the Magdalena Peninsula you have the most beautiful views of the bay, and from the heights of Peñacabarga you see its size and importance to the city. Watch the sunrise over the bay and enjoy its unique color.

Lists and places related to Bay of Santander

Information about Bay of Santander