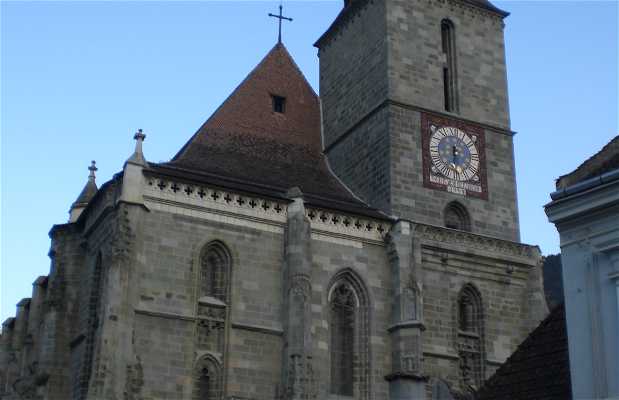 the largest church in the city

This church is the largest church in the city. It is located in the historic center, in front of the old Town Hall. It was constructed between 1385 and 1477 over the remains of an earlier church which was destroyed by invading Mongols in the year 1242. Throughout its existence, it has undergone various vicissitudes, the last was in 1689 when a large fire destroyed the city and caused the walls to go black (since then, it is known as the "black church"). It had to be rebuilt afterwards. It is the largest Gothic church to be found in Romania, although its interior is mostly Baroque. It is made of sandstone, and it has six gates which are decorated with various sculptures.

The Black Church, a symbol of Brasov, is located behind the large central Sfatului square, or the marketplace. In a region of great insecurity, with invasions and non stop wars, the construction of this church was interrupted several times. It began in 1383 and ended in 1477. This part was made at the beginning of the fifteenth century, during the heyday of the Gothic style. At the same time, a fort was built, decorated with statues, sheltered to protect from the enemy. Today, what you see are copies of these statues in the western part of the church. The portal is a beautiful example of flamboyant Gothic style of Central Europe, with many arches and vine leaves very finely carved into stone.