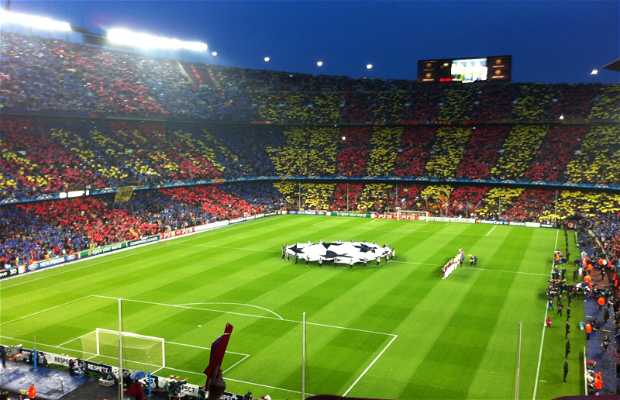 Best to see a match live

The FCB stadium is one of the biggest in the world. It's the biggest in Europe. Hans Gamper, a Swiss sports fan, founded this sporting club that became something "més que un club" (more than a club). It became the meeting point for supporters and defenders of democracy (during the Civil War and Franco's dictatorship).

It is the "blaugranas' (Barcelona's" third stadium, inaugurated on September 24th 1957. If you want to know what I am talking about, have a walk on the second floor of the museum. You will find out about the nickname "culé" (meaning "of the FCB"), be dazzled by the three titles won this year or see the model of the project for the remodeling of the exterior by Norman Foster.

I guess it is not necessary to say, but for those who don't know much about football, this stadium is the one where all the matches of the Fútbol Club de Barcelona, better known as "Barça", take place.

The inauguration took place in 1957, after three long years of intense work, mainly on the cement and iron structure. They used to play the matches in the stadium there was in Les Corts, but with the increasing popularity of football, the field became too small, so they had to build the current one. The stadium holds a capacity of more than 98,000 people, currently the biggest in Europe.

FC Barcelona's stadium is the biggest stadium in Europe, with 94,000 seats. Reformations on the structure are soon to come, as the fans are not protected from adverse weather. In the surroundings you will find almost all the buildings of the different sport sections of the Barça, like the MiniEstadi or the Palau Blaugrana.

Like in every important club stadium, the stands have seats painted in this style: you can read FC Barcelona, the Nike logo and the slogan "Mes que un club". Apart from being UEFA Elite Stadium, various events take place there, like concerts, for example.

The football fields are the equivalent of what many centuries ago were the Roman circus. Of course the use and the price have turned these block of concrete into ugly and grey buildings. Nevertheless, when lights are turned off and the stadium is illuminated, the show makes you forget about the poor comfort of the seats or the shouts of your neighbor.

The match was Barça-Getafe and Goliath (Barça) won, even though David would have the opportunity to win the Copa del Rey. No doubt you can see the games better on television, the close-ups, zoom, replays and comments. However, seeing a match

Being in Barcelona without visiting Camp Nou - that’s unforgivable.