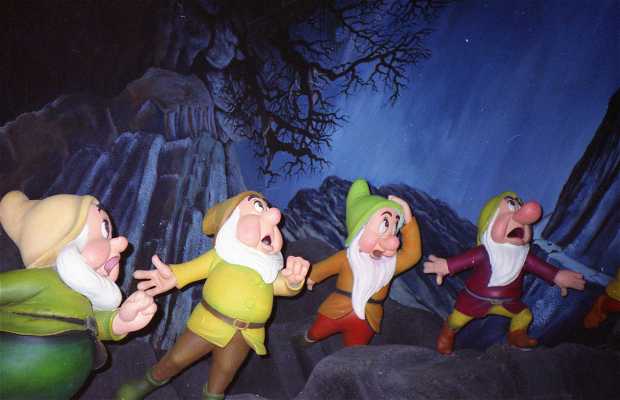 Opened in 1955, it is now the second most visited park in the world, behind Disney World Orlando. The actual park is known as the Magic Kingdom and is actually just 1 of 4 parks in the area. If I'm not mistaken the parks are: (Magic, MGM, Animal Kingdom, Epcot). The Magic Kingdom is just one of the four, but it is the original. So not to be missed, whether you are big or small, but if you've been to Eurodisney, it is exactly the same. It is 40 km from the center, but within the city, specifically in Anaheim.

During our road trip in the US, I lost a bet with my friends. I wanted to visit Tijuana, but there were 3 of us so we ended up at this amusement park. There were two options: the one with the disney princesses and the one with adventure and there was no way I was going to lose this one, they could not make me spend the day watching princesses :/ Well, I have to say that I loved this place! I had a blast! The best amusement park I've ever been to in my life. The ferris wheel looks so harmless but, mother of God! The "cage" that we sat in was swinging about in the sky. The attraction "Hotel" was the best ever, with an added surprise.

9 days! In a row! I went with my mother, sister, foster sister and nephews for new years. Saw the holiday parade and fire works and at the end got to see the new fire works and parade. Also got to meet and have my picture taken with Eric Estrada, saw the filming of Wheel of Fortune and the new Frozen show. Wednesday was a real treat for annual passholders because we got to see the making of 20000 Leagues Under the Sea and we were given Big Hero 6 backpacks. Had a great time!

The best place in the world

No matter if you're a kid or a teenager or even an Adult you always gonna feel inside a Disney Fantasy!

Disneyland is my happy place...

As cheesy as it may seem it really is my favorite place. I've gone there to heal from breakups and bad days, I've had phone interviews and job offers while visiting, I've made new friends from around the world, you really can forget about everything else for a little bit of your day. I've cried with happiness there for no reason, I've laughed harder there with friends then anywhere else, even when I'm there alone everyone is like family.

This is a favorite vacation, no matter the age, it brings happiness and childhood memories!

It's known to be the happiest place on Earth.

Enjoyed every moment of it especially Fantasia at night

Disneyland is always a must whether you're a tourist or a CA native!

+54
See original
Like
Have you been here?
Add your opinion and photos and help other travelers discover