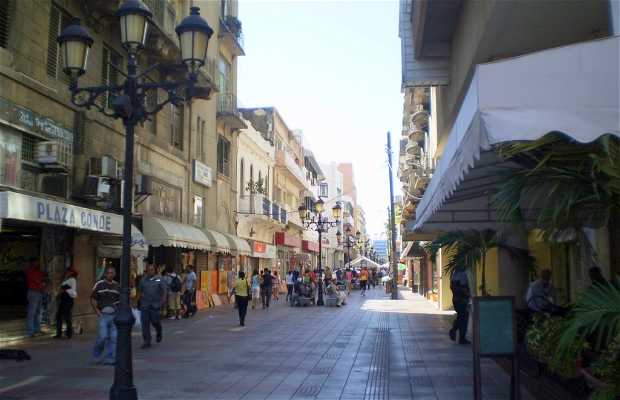 La Calle El Conde runs along the north side of Columbus Park, merging it with the Independence Park, where you will find the Puerta del Conde. It was given this name in honor of the Earl of Peñalba, Governor and Captain General of the island in the early 17th century, ve led the victorious battle in defense of the city against the British in 1655. It is the only pedestrian street in the city, which crosses from east to west the the colonial area. It is a very busy road and the main shopping street of the colonial area, famous for its shoe shops, jewelry stores, and souvenir shops. On the street corner with Calle Conde Archbishop Merino is the City Council and Bartholomew Columbus Monument.

It’s in the heart of old Santo Domingo City and it’s where all the local trinket shops are.

You’ll be sure to find everything you’re looking for in this streets, plus probably a little extra. Just be attentive as usually people try to steal from unaware tourists.

Amazing place with a great view of the...

Amazing place with a great view of the ocean, nice park full of doves and next to our Cathedral. There is a lot of Dominican story and culture and last but not the least nice restaurants and stores .