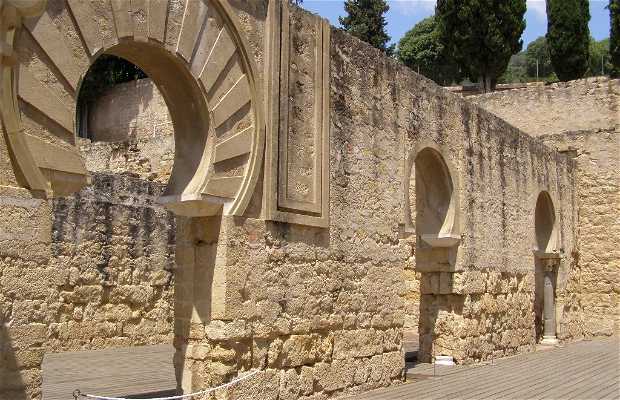 The Archeological Remains of Medina Azahara

When you go to Córdoba, besides visiting the city, you must visit the archeological remains of Medina Azahara, one of the great works of Islamic art in Andalucía.

Medina Azahara was a magnificent palatine city built by the orders of the first caliph of Córdoba, Abderraman III, to give a powerful image of the recently created Independent Caliphate of Cordoba.

Medinat-al-Zahra was organized in three big terraces surrounded by a wall. In the upper part was the royal palace, with the rooms of the caliph and his family; the middle one was the bureaucratic and administrative area, with the halls and gardens; the lower one was destined for the houses of the people, as well as for the souk and mosque.

It is one of the most beautiful and charming places in Córdoba, and like every story tale palace, its legend tells the story of a great love.

According to the legend, in 936, the caliph Abdul Rahman built this palatine city in honor of his slave, Azahara, even though it is clear that it also had to do with power. A place with gardens, fountains, luxury and ostentation in a dream palace.

Its most important parts are the private rooms, the Royal House, the House of Viziers, the House of the Army, the House of Ja'far, the Prince’s House, the Oriental Portico, the Abs al-Rahman III Hall and the Salon Rico. However, the architectural work was very brief. 74 years after its construction, the entire complex was destroyed and sacked by the Berbers. What remains is a must see. In my opinion it looks even more beautiful in its state of ruin, in the middle of an almost desert landscape, with amazing ochre and blue colors.

Fewnpeople know about it but it is very interesting

Magical place where the Self proclaimed Kalifa built his Shiny City. Fewnpeople know about it but it is very interesting. This ruins were discovered in 1911, very recently and have been rebuilt with a lot of care.

The Remains of Time

Medina Azahara is one of those places that time left in ruins. In the foothills of the mountains of Córdoba, there used to be an amazing palace-city, one of the most emblematic places in the world in its time. Today you can still observe its magnificence.