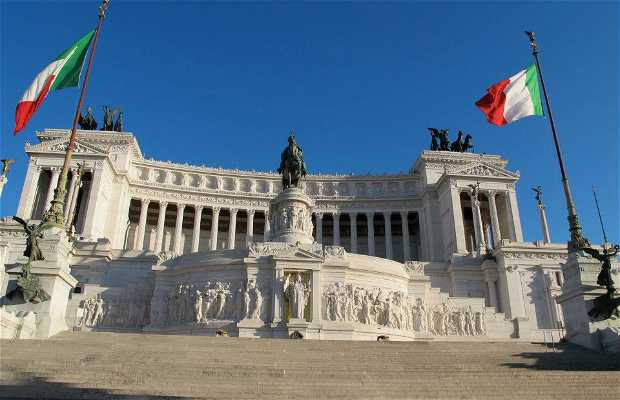 It's located on the Piazza Venezia at the end of the Via del Corse and close to the Roman Forum. As soon as you enter the complex, you're greeted by two huge tri-color flags. The colossal monument is about 135m. wide and 81m. tall (including the chariots that adorn the towers on both sides).

This monument honors the memory of the King Vittorio Emanuele II di Savoia. It's located in Piazza Venezia, but the Romans don't like it much because to build it they destroyed a good part of the historic center. But it's still there and they won't destroy it now. It's also a reminder of hard time, as it was built by Mussolini, and many military parades started there, and it's where the dictator made speeches. The monument is located near the Forum of Trajan, where it's intrusive style contrasts with the finesse of Roman ruins, and it's a shame that they had to destroy it. Vittorio Emanuele reigned over Italy only 17 years.

Some wanted it demolished

This monument was conceived in the late 19th century in honor of King Vittorio Emmanuel II who died only a few years after managing to united the disparate states of Italy under one flag. The monument has been controversial from the start since its colossal dimensions, white stone, and pompous rhetoric seem out of place among Rome’s more classical monuments. Also keep in mind the valuable buildings that were demolished to make room for the large monument.

Amazing monument. Climb to the top and enjoy the view.

Incredible place, this year they organized a wonderful Monet show

Lists and places related to Monumento a Vittorio Emanuele II