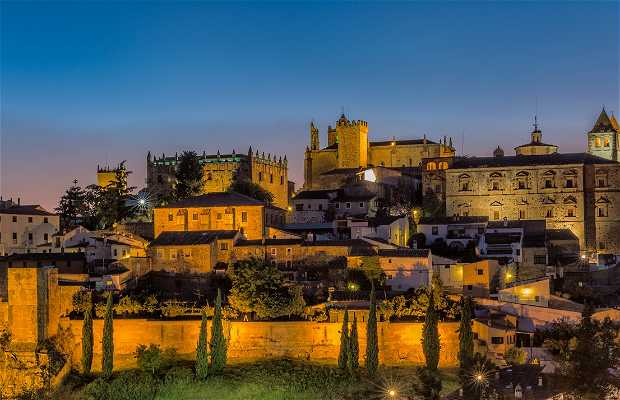 379 photos of Old Town of Cáceres

94 reviews of Old Town of Cáceres

The footsteps of Jews, Arabs, and Christians

The history of Cáceres goes back around 25,000 years, proof of which can be found in Late Paleolithic-era cave paintings found in a cave in the historic district. The cave is unfortunately closed to the public but there is an exact replica in the Interpretative Center. Cáceres was founded by the Romans in 25B.C. and is recognized as a bi-millennial city. Its later history was plagued by battles between Christians and Moors for control of the city, which was finally recovered in April 23rd, 1229 (St. George’s Day, patron of Cáceres) by Alfonso IX. When we pass beneath the Estrella Arch of the Puerta Nueva (15th century), we are really passing through much more than just physical space; we’re literally taking a trip through time and exploring the same worn cobblestones that felt the footsteps of Jews, Arabs, Christians, Mozarabs, nobleman, peasants, soldiers, and clergy on their way to the Plaza of Santa María , its Cathedral, and palaces.

Caceres is one of Spain's best preserved old towns. You can access the old walled city from the Plaza Mayor which, even today, still seems like it breathes medieval air. Besides the fact that the town is in such excellent condition, the most striking thing is that no modern buildings distort the landscape. This is what makes it a wholly unique city. You really should visit it when traveling to Extremadura as it is, along with Merida, the city with the largest legacy of community heritage.

Lists and places related to Old Town of Cáceres

Information about Old Town of Cáceres