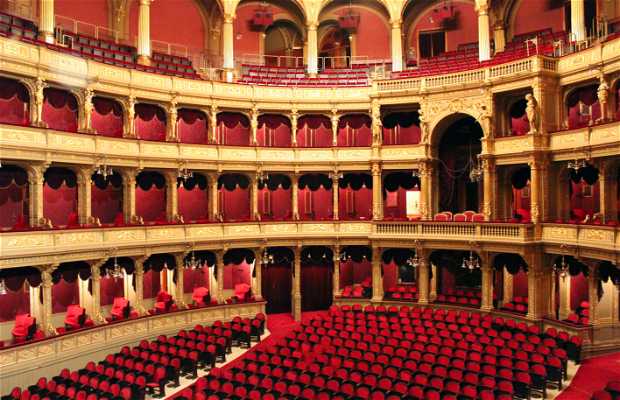 The grandeur of the Austro-Hungarian Empire

If there was one thing that the Austro-Hungarian Empire excelled at, it was building opera houses! Though not quite as spectacular as the Vienna State Opera (in fact, this was an explicit rule when it was built), the Hungarian State Opera House is a stunning building and a visit not only lets you enjoy the magnificent architecture, but it also helps you get a sense of what high-society life was like during the Budapest's heyday in the late 19th century.

First, some logistics – if you're not planning on seeing a show (which is actually a lot more affordable than you'd expect), you can visit the Hungarian State Opera on one of the guided tours offered daily at 3:00 and 4:00 in the afternoon. Visits in English, Spanish, French, German, and Italian are offered daily, and visits in Japanese and Russian are offered a couple of times a week. If you're visiting Budapest during the high season, make sure to stop by the Opera House and grab your tickets in the morning as there's a good chance it will fill up. Now, on to the fun part!

Definitely one of the most unique buildings in Budapest is the Opera House. Situated in the heart of the city, near the Parliament building. From the outside it is quite striking. However, its real appeal is inside. There are organised tours available which are worth doing. It is very beautiful inside and one of the best opera houses in Europe.