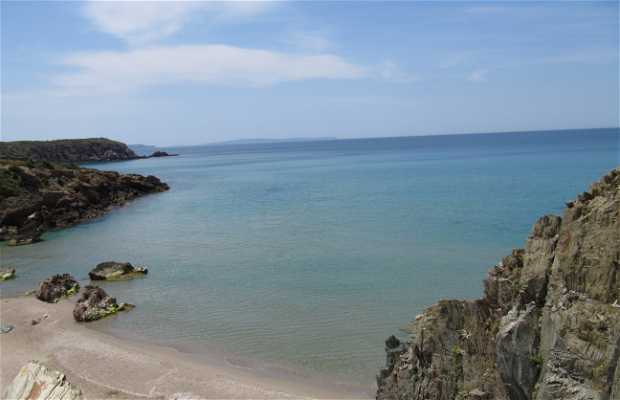 This is a part of Sardinia full of mines, some closed, where minerals were mined for centuries. Tourism is still new to this part but it is not without charm, such as Sugarloaf, and Cala Cala Domestica gonnesa. We were a little surprised that we had not heard of the place. They took us to the small cove off the island, which is accessed after leaving the the road and down the winding small road to the sea. It took 25 minutes. There we took a few pictures of the place and swan in the cove of crystalline waters. The Pan di Zucchero(sugarloaf) is an island with a mighty cliff that rises 132 meters, declared a natural monument.

The small island of Pan di Zucchero (“sugarloaf”) is located in the beautiful bay of Planusartu along the Costa Iglesias. Pan di Zucchero is a limestone cliff 133 meters high that’s recognizable for its light color and various levels that make it look like a gigantic cake. The island was formed by wind and water erosion and you can see the karstic ravines at its base on one of the many boat trips that leave from the beach front.