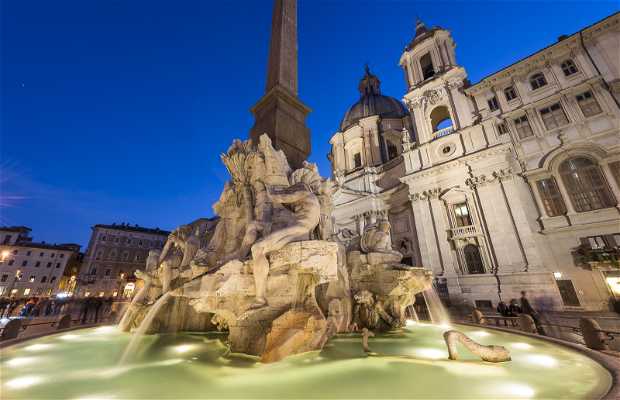 A must if you’re in Rome

The Piazza Navona is one of the most famous squares in Rome. It's located east of the river not far from the Vatican. This is where the Stadium of Domitian was located in ancient times and if you view the area from above, you can still imagine the circular form of the arena. The square itself is like a work of art, not only because of the sculptures and fountains but also due to the surrounding buildings. The ruins of the ancient arena are nearby and you can get a good idea of what the zone was like a thousand years ago.

Bernini's Fontana dei Quattro Fiumi is located at the center of the square along with the obelisk. The fountain represents the four great rivers of the world: the Rio de la Plata (the Americas), the Danube (Europe), the Nile (Africa), and the Ganges (Asia). It's one of the busiest squares in the city and is usually crowded with locals as well as street artists who come during spring and summer afternoons to paint and entertain the crowds of tourists. The Church of Sant'Agnese in Agone is another major landmark in the square. A popular Christmas market is held during the holiday season, but there is also a street market on weekends.

A theatre of stone

A Roman friend of mine who acts as a sort of personal tour guide when I'm in Rome says that the Piazza Navona is a theatre of stone. Me? I just love it, especially the ornate and gorgeous buildings that surround it. The most striking part, though, is definitely the Fontana dei Quattro Fiumi built by Gian Lorenzo Bernini in 1651. These four giant fountains symbolize the greatest known rivers at the time. The Nile has a mask because, at the time, its source was still unknown. At the time it was built, many locals took this veiled figure as a symbol of contempt for the Church of Sant'Agnese in Agone designed by Borromini, a rival of Bernini.

Walk among Roman art and history

This square was defined as such in the late fifteenth century, when the market moved here from the Capitol. The Piazza Navona is of the Roman Baroque era and the papacy of Innocent X. In the square you'll see the Church of St. Agnes in Agona (Sant'Agnese in Agone) of Francesco Borromini. Front, and in the center of the square is one of Gian Lorenzo's fountains - Bernini's Fountain of the Four Rivers (Fontana dei Quattro Fiumi) from 1651. Bernini and Borromini did not get along, so one of the men in the Bernini fountain covering its face in front of the church by Borromini. The Piazza Navona is home to 2 other fountains by Giacomo della Porta: the Fountain of Neptune (1574) and the Fontana del Moro (1576).

One of my favorite piazzas to visit. Great scenery

Beautiful buildings, street artists and many coffee shops around to enjoy a cappuccino or an aperitivo.

Amazing square. There are many cafes.