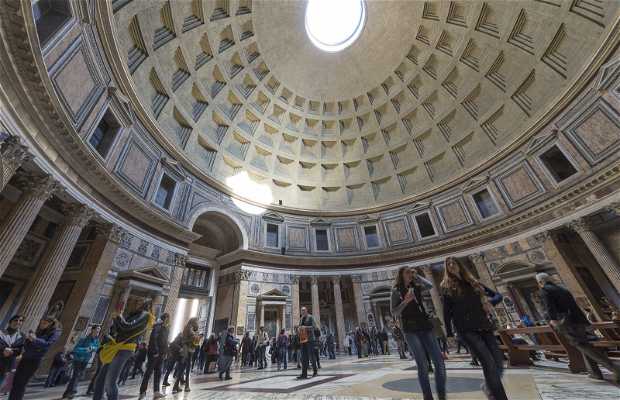 "Angelic and non-human design," was how Michelangelo described the Pantheon 14 centuries after its construction. The highlights are the gigantic dome, the upper eye, the sheer size of the place, and the harmony of the whole building. We visited with a Roman guide which is exactly how you should (or shouldn't) visit the city, especially since they talk too much and have lots and lots of history of each building.

And so we learned things like how the interior dome was filled with sand during construction. Or not, because it really is impossible to be sure of anything when one doesn't know Italian and the guide has a very thick Roman accent.

The Pantheon is one of the best preserved ancient Roman monuments and it was the first classical building to be transformed into a church. In 608, the Byzantine Emperor Phocas offered it to Pope Boniface IV and this ancient temple dedicated to "all the gods" became the church of St. Mary and the Martyrs in honor of history's martyrs. In the process, a massive amount bones from Rome's catacombs were moved to the new church.

Although the Pantheon bears the name of Agrippa, builder of the first Pantheon during the reign of Augustus, the building which stands today was built by the Emperor Hadrian in the 2nd century. The circular interior (the dome is a perfect semi-sphere) was intended to reflect the perfection of the everlasting Roman Empire.

My favorite place in Rome

I don't want to go through all the dates, dimensions, or emperors, though I do like to learn about those things. There are, though, many interesting legends surrounding the Pantheon.

One story has it that they were storing earth in the interior in order to built the largest cupola the ancient world had ever seen. In order to remove the earth, Romans were told they could keep any gold they found in it and the inside of the Pantheon was cleaned in record time. There are other "legends" buried inside like Rafael Sanzziol, Vittorio Emmanuel II, Umberto I, and Queen Margherita.

Today the building serves as an austere yet attractive backdrop to the Piazza della Rotonda, one of the busiest squares in all of Rome. There are, of course, other legends like that of the "Norcini," sausage vendors who in 1638 were caught selling sausages of made from people they had murdered people and the townspeople themselves extracted revenge, beating, beheading, and quartering them right there in the square.

You need to visit that place

It always takes your breath away!

Best thing you can do if you are looking for a place to eat is going to the Pantheon and after going inside you can choose a restaurant outside. The food is good and the view is exceptional. Best place to relax in the middle of the city.

One of the best place to visit in Rome

The people inside always tell to be quiet, is a nice place

Lists and places related to Pantheon

Links to Pantheon
Hotels near Pantheon Historical Monuments in Rome
See something odd?