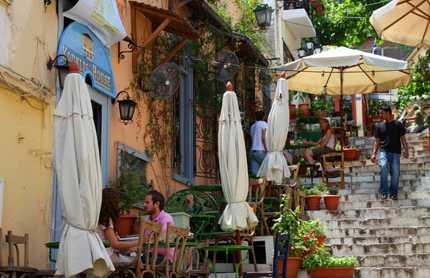 Most popular neighborhood in Athens

Plaka is probably the most popular neighborhood in Athens, as well as one of the oldest. And, given its location just below the Acropolis, it's also the one that attracts the most tourists. The neighborhood consists of a cluster small streets full of restaurants and souvenir shops and is divided into two sections (High Plaka and Anafiotika) by Adrianou Street, one of the oldest streets in the city. The origin of the name is unclear, but there are two more or less accepted ideas: one states that the name derives from the Albanian word "pliakou," meaning old. The second version references a large stone plaque which was once located between the Adrianou, Tripodon and Lysicratous streets.

Lists and places related to Plaka

Links to Plaka
Hotels near Plaka Neighborhoods in Athens
See something odd?