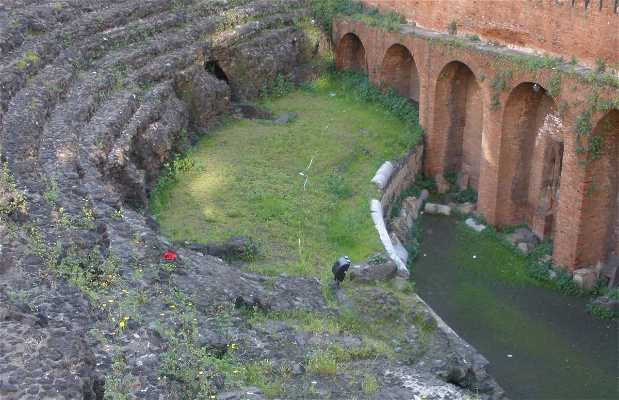 Catania is full of wonderful places that will leave you slack-jawed, one of which is located in the heart of the city, in Piazza Stesicoro. It's a 2nd century Roman amphitheater. At first it may seem like it's just simple ruins, but they're guarded and protected so that people don't ruin it, but in reality, what we see is a portion of one of the most immense amphitheaters that formerly existed. It had a capacity for more than 16,000 people and was second only to the Roman Colosseum. To get an idea of ​​the size it formerly possessed, it is best to look at the vaults, or in one of the semicircles of the amphitheater. Today we can see the ruins are under the ground floor, and the rest of the construction is hidden beneath the adjacent buildings. Actually, until 1904, the whole amphitheater was hidden under buildings, but the mayor at that time decided to instruct the architect Filadelfa Fichera rebuilding the part that's currently visible today. The result is a mix of old and new, which is very interesting and eye-catching. While the ampitheatre shows the great history this city had, the nearby buildings show the modernity that existed in these moments in Catania.