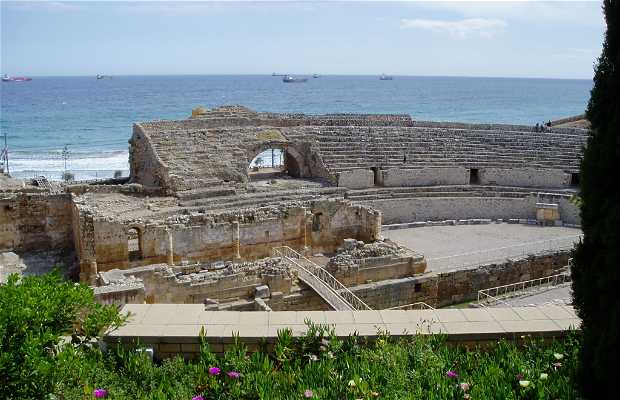 The Roman amphitheatre is one of the most famous and iconic monuments in Tarragona, so much so that is was practically the only thing I saw when I first visited!

It’s one of the best-preserved amphitheaters in the Iberian Peninsula and what’s really cool is that they dedicate one week a year to recreating what the theatre was like back in Roman times.

During this event (it’s called Tarraco Viva), there are re-enactments of gladiator battles and an expert troupe of Italian actors ve explain and interpret the fights.

The sensation is like living back in ancient Roman times and besides being a really wonderful spectacle, it’s also quite interesting.

It is not hard to imagine what used to happen in this amphitheater located almost on the showers of the sea.

Tarragona has a lot of history to tell, as remnants from a large Roman metropolis appear in all corner of Tarragon. They give us a clue as to what live was like in those times.

The amphitheater (one of the UNESCO World Heritage sites), was built in the II century A.C. and had a capacity of about 15,000 spectators.

It’s very-well conserved natural rock structure makes a 130x102 meter ellipsis. It’s the only amphitheater of its kind in Cataluña. From the stands you can see the sea. The beach is the stage for the spectators.

Together with this, you can find some pits/troughs that functioned as auxiliarly services. In the central part of the amphitheater, the remains of a Visigoth basilica (6th century) and a Roman-gothic church (7th century) can be found.