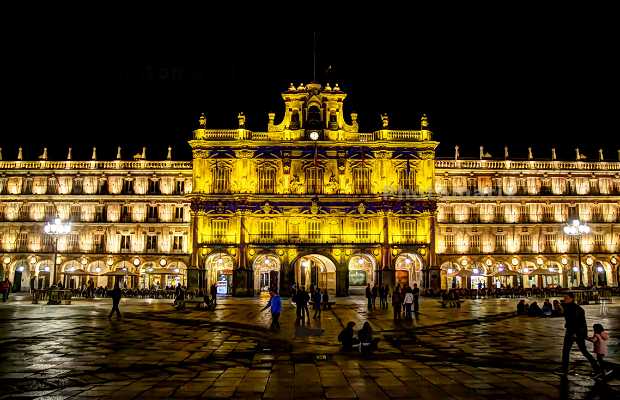 612 photos of Plaza Mayor of Salamanca

199 reviews of Plaza Mayor of Salamanca

Breakfast in the plaza

After a long night out in Salamanca (amongst a majority of students), there is no greater gift you can give the beleaguered body (which also deserves a break from time to time, "poor thing"), than a breakfast in the Plaza Mayor of Salamanca, (there are several cafes that look good).

Hot churros with chocolate, a good coffee (or whatever it is I drank) relaxing the mind in front a statue that seems alive, of Torrente Ballester (adopted son of the City) in the oldest coffee house (of 1905) in Salamanca, the Novelty Café.

While you eat breakfast, you can see around you the baroque art of the square, (also, street level art that can be enjoyed by all, which is what I like), or the coats of arms of famous celebrities from Spanish history (I was going to say illustrious, but there are some who don’t deserve it).

Salamanca is a city of contrasts. From the crowded city full of students who can alarm even the most stoic hermit to the architectural tour mystified by years of Castilian stories.

The Plaza Mayor is an impressive centre that exemplifies the desire of the times for the continuation and the exaltation of important figures terrified by the image of forgetfulness and buoyed by the idea of greatness. This Baroque complex contemplates the city perfectly adapted to our times, going unnoticed by the eyes of those who have crossed it so many times. But if we walk, dodging the Erasmus and the adolescents

Salamanca’s Plaza Mayor is impressive and big. It’s a common meeting point for those from Salamanca and tourists alike, especially when it’s time to head out for some tapas and have vermouth or two during the weekends. The Town Hall and Tourism Office is located there, as well.

It’s a great place that’s always filled with people, which makes taking a picture of just the plaza’s façade a near-impossible task. If you don’t like overly-crowded places, don’t go to the plaza on Palm Sunday. It’s always overflowing with people, as the procession finishes there.

The medallions of the square

The Plaza Mayor in Salamanca is one of the most beautiful in Spain and is visited daily by thousands of tourists.

Everything here has an incredible charm, but there are many details that go unnoticed by most visitors and which, actually, are what make this location truly unique. Like the medallions that can be found in each of the 88 semi-circular arches that form the colonnades of the square.

Over the years, these medallions have been used to immortalize the most illustrious, so we can find people of all eras and for all tastes. On These medallions appear depicted figures as diverse as the Middle Age kings and bullfighters who have been of great importance in the city.

+43
See original
Like
Have you been here?
Add your opinion and photos and help other travelers discover

Lists and places related to Plaza Mayor of Salamanca

Information about Plaza Mayor of Salamanca